The view from Phoenix 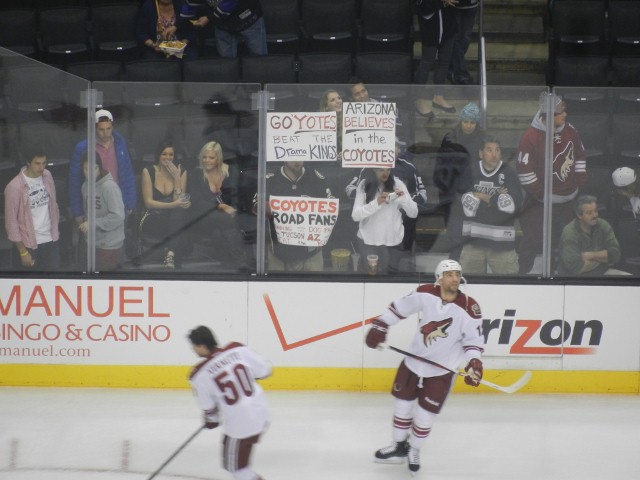 FOXSportsArizona.com’s Craig Morgan covered the two-game set at Staples Center and has a collection of relevant quotes in last night’s game story while analyzing Phoenix’s performance. Video of Dave Tippett’s post-game press conference is also embedded, which means you can watch him refer to the Doan-Muzzin entanglement as “Two guys colliding,” before opining that “I didn’t think there was any intent there on their part.” Stick around for the video that follows – In My Own Words: Shane Doan, Team Canada.
FOXSportsArizona.com: Coyotes’ offensive struggles continue

Dave Tippett, on the loss to L.A.:
“We had a great effort. It’s too bad we didn’t win. Our guys deserved to win tonight; we played harder than they did. We had more chances. Unfortunately we had a couple of calls that went against us and they dictated the game. We had lots of push in our game tonight. We missed far too many opportunities. This was a game that probably shouldn’t have been close.”

Tippett, on Shane Doan:
“He recognizes the situation we’re in. We need wins. We’ve had to take it to another level and he’s the one that lead us in that department. He was a bull out there. He scored two goals. It was disappointing; our team deserved a better fate tonight.”

Shane Doan, on last night’s game:
“Obviously everybody in this room is frustrated and disappointed. We have to start with a desperate game and play the full game as desperate as we can. There are a lot of good things in the game. We have to take the positives and keep going. We could have just as easily won that game but we didn’t. That’s the way it goes.”

Radim Vrbata, on returning from his foot injury:
“It was a good to be back after four weeks. Timing was a little off. It got better as the game went on. Made more plays with the puck in the second and third. Hopefully with conditioning and timing it will get back quick. It’s not easy to miss four weeks and then jump into it right away when you don’t have enough team practices. It is what it is.”

Vrbata, on the Coyotes scoring twice in the third period:
“It was too late. We had lots of chances and lots of shots. It would be nicer if we scored earlier to get us in a game and not chase a game again. We scored, we have to forget about it and focus on the next game now.”

Vrbata, on playing from behind:
“If we would have scored first it would have been a different game. It’s not easy to chase a game. When you are down two goals it’s difficult. The good thing is we stayed with it and got a couple of goals and almost tied it at the end. It wasn’t good enough though.”