The view from Newark 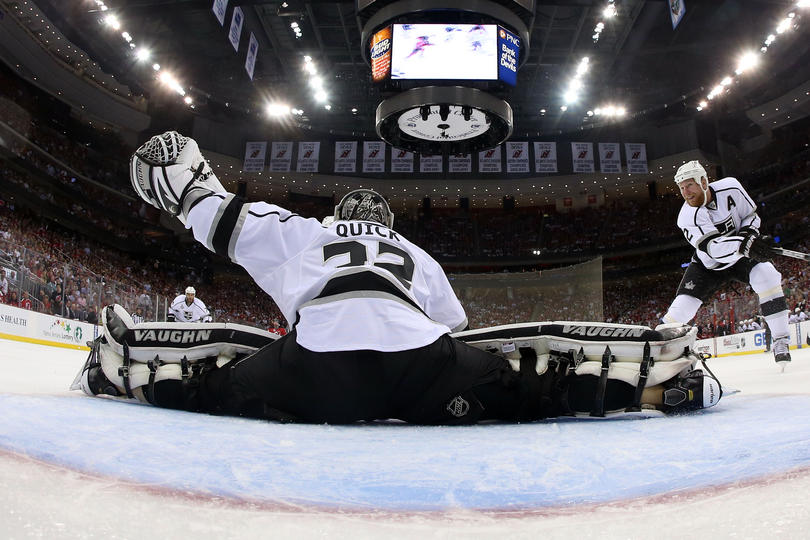 Here’s the statistic that will keep the New Jersey Devils from getting too down on themselves this morning, and keep the Kings from patting themselves on the back too much. In the second round, the Devils lost Game 1 to the Philadelphia Flyers. They won the next four games by a combined score of 15-7. In the Eastern Conference Finals, the Devils lost Game 1 to the New York Rangers. They won four out of the next five games. One game doesn’t make the series, and if last night’s Game 1 was any indication, this series could be long and brutal. The Devils have enough veterans on their team that they won’t get down on themselves, and they can take plenty of positives from Game 1, starting with Martin Brodeur’s play and the fact that, on a handful of occasions, they were within a few inches of scoring a second goal. The Devils now get two days to regroup, refocus and deal with the idea that they don’t want to lose another game at home. Here’s how The Star-Ledger and The Record covered last night’s game, followed by some additional postgame quotes from the Devils…

(on the read on the overtime goal…) “Yeah, we made a little bit of a bad read. There were a couple decisions there. But we’re playing to win the game. I don’t make any apologies for that. You know, we made a mistake; they capitalized.”

(on whether the game was a little bit of a feeling‑out process for both teams…) “Yeah, I think we’re going to have to find another level. I feel we have another level. I thought we came out a little tentative, as was expected for a Stanley Cup Final game. I thought we got better as the game went on. That’s a team you’ve got to play 60 minutes against. The good news is we started in the same hole against Philly, we started in the same hole against the Rangers. We responded to the situation in the right way the last two rounds, and I expect the same.’’

(on Zach Parise’s game, and what the Kings were doing against him…) “It was a combination. They were good. They were off for a while. We knew they’d be good. I thought we were a little tentative early. Once we got comfortable, I thought we started to play better. We’ve got to be better than we were tonight.’’

(on playing well in the third period…) “Yeah, well, we pushed in some spurts tonight, like you said. That was one of them. There was a few of those, but not enough to have success against that team.’’

(on the keys to improving…) “I think our group has a pretty good ‑‑ does a pretty good job of self‑analyzing, looking at the game and realizing, both individually and collectively, where we have to get better. We have two days to do that. We’ll be better on Saturday night.’’

(on the Devils’ scoring chances in a 1-1 game…) “You know, it would have been nice to get a bounce. But, you know, I don’t believe we deserved to win tonight. That’s the bottom line. That’s what happened. If we had have won, we would have been sneaking one out, so…’’

(on how the Devils need to improve…) “Just play better. Just be smarter with the puck. That’s it.’’

(on what surprised him about the Kings…) “Nothing. Nothing at all. We knew what to expect. There were no surprises there.’’

(on not being able to convert on strong scoring chances…) “We did have the opportunities. We had a couple open ones there in the third period. A couple good ones in overtime, too, but just, we couldn’t put them in.’’

(on what the Devils can build on for Game 2…) “We have to be better, pretty much in all areas. Like I said, we just made it way too easy for them. We turned the puck over at the blue line. We didn’t dump it right. It wasn’t our best game.’’

(on the game…) “Obviously we were slow coming out of the gates. I think it was pretty obvious. I thought, in the third and in overtime, I thought we started to play our game. We started to play pretty well there. … It was an average game, I think, by us, but they played well. They forced us into that a little bit, too. So we’ve just got to get back to it and get ready for Saturday.’’

(on what the Devils will work on before Game 2…) “It’s nothing down to rocket science here. We’ve just got to execute. We’ve got to stick to our game plan and execute. I think that’s the big thing. (With) Xs and Os, you tweak little things here and there, but it comes down to execution and sticking to our game plan.’’

(on the game…) “At certain times, we were a little panicking with the puck. We had guys helping out, good support, but we threw the puck away. And, at certain times, we had no support. So, we were just missing — the timing wasn’t there (or) the support wasn’t there. … That was probably the worst hockey game we have played in the playoffs so far.’’

(on the game…) “We will never give up. We’re not going to give up. It’s just the first game. The fun begins. It wasn’t our best game, at all, and we know that. But give them credit. They were playing a pretty good game and they scored that big goal in the end, but we’ll watch the video and we’ll see what we did wrong and we’ll try to eliminate those mistakes for the next game.’’