The view from Glendale 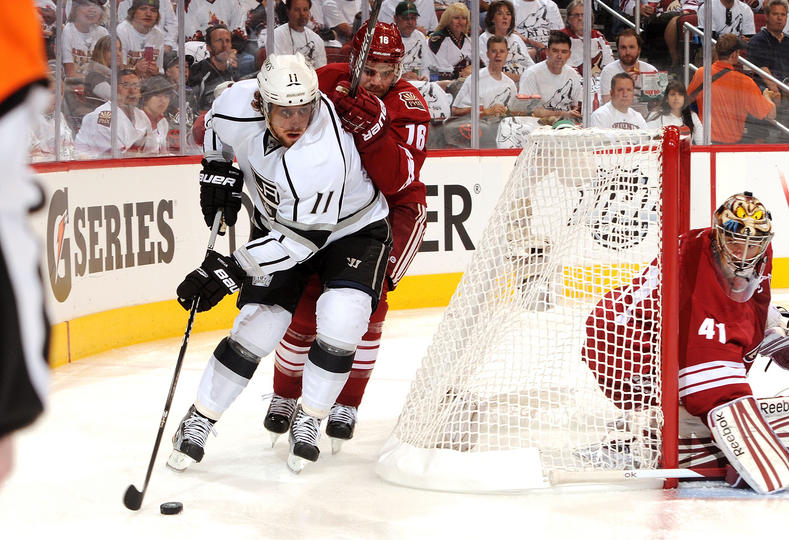 It’s hard to imagine mild-mannered Phoenix coach Dave Tippett being more upset publicly than he was last night after Game 1. The word “seething’’ wouldn’t be inaccurate in describing Tippett’s demeanor as he spoke in his postgame media session. When a coach, faced with his first question, responds with, “We got beat in every facet of the game,’’ well, that pretty much says it all. That quote comes from a coach who knows his team has better to give. The Kings responded better than the Coyotes to the week-long break in the schedule. Now, it’s a totally different scenario. The Coyotes will be angry and motivated. They will, no doubt, spend a lot of time today talking about doing a better job against the Kings’ first line, about generating more rushes and scoring chances and about putting more pressure on Jonathan Quick. The Coyotes are a veteran team and they have a good coach. Now, they’re trailing in a series for the first time in this postseason. How will they respond? Here’s how The Arizona Republic covered last night’s game, followed by some additional postgame quotes from the Coyotes…

(on the Coyotes’ troubles against Anze Kopitar’s line…) “I didn’t see it as just the Kopitar line. I thought their whole team was better than our team. If you like Kopitar’s game, he was a lot of them. We weren’t close in that game. We got beat in every facet of the game. Hopefully we take some lessons from it and we can be better next game.’’

(on the Kopitar line being in sync…) “I’m worried about our team. We’ve got players that I have to worry about getting playing better, not worry about Kopitar.’’

(on the start to the game…) “I felt like our execution was so poor… I bet you there was between 25 and 30 shots that they got in the game, or attempted in the game — and early was a lot of it — that we had the puck on our stick and it ended up on their stick and a shot in the net. The execution, and the will to get things done — is going to have to improve greatly if we’re going to have a chance in this series.’’

(on not being able to grind out a win, as they had earlier in this postseason…) “As the playoffs go on, the bar gets higher and higher. You have some players that can rise with the bar, and we didn’t have enough guys rise with the bar tonight. We had some games like this, but not to the point where we got out-competed as bad as we did.’’

(on how he felt being tied after two periods…) “We’re fortunate to be in the game. It’s a winnable game. If we start playing, we might have a chance.’’

(on how much of the game was the Kings’ good play, and how much was his team’s poor play…) “Like I say, I’ll start with our team, and we’ll start there. Once we get that cleaned up, then we can find some other areas.’’

(on whether he leaves this game feeling frustrated…) “We leave this game just like we did against Game 1 after Nashville. We know there’s some adjustments we have to make. We know there’s some parts of our game that have to be much better. The only difference is we didn’t get the fortunate outcome we did against Nashville. Let’s be honest, there were stretches in that Nashville game that could have went the other way, and tonight it didn’t go our way. There’s some areas we can be much better at. I give them credit. They played a strong game, but I think our team is going to have to be better if we’re going to have a chance.’’

(on his team’s undisciplined penalties…) “You know, it’s one of those ones where you’ve got to be aware. If you see what happened, (Martin) Hanzal gets cross-checked just before that. He gets up and slashed. You have to be able to grit your teeth and take that. The retaliation is going to get called more times than not. That’s the way the referees use to keep control the game. If you’re not willing to take those whacks and take a number, then you’re going to be in the penalty box and ultimately hurt our team.’’

(on what the Coyotes should take away from the game…) “As expected, it is not going to come easy. We know that. We had a great example tonight. It was a hard game and tight, with a lot of intensity. It’s just going to be a huge battle and we have to be a lot better on our one-on-one battle.’’

(on the pressure the Kings put on them throughout the game…) “Overall, we need to be better. We need to be a lot better off the start. We started to generate some stuff in the second period a little better.’’

(on the sluggish start in the first period…) “We weren’t really good at any part of that period. That’s disappointing. When we tied it up 2-2, we kind of got a little momentum, but we weren’t good enough.’’

(on the series being far from over…) “We have to find a way to win the next one. That’s what we’ve been talking about. Once the game is done, we have to get ready for the next one and continue moving forward.’’