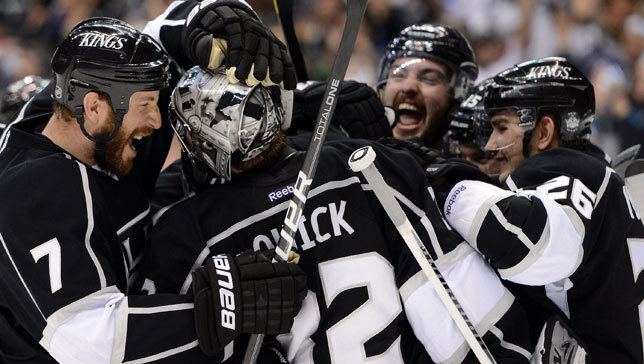 — The Kings reached the third round of the playoffs for the second time in franchise history, as they beat the St. Louis Blues 3-1 in Game 4 on Sunday afternoon at Staples Center.

— The Kings had never before recorded a sweep in a best-of-seven playoff series.

— The Kings became the first-ever team to be seeded No. 8 and beat the No. 1- and No. 2-seeded teams in the same postseason. The Kings are also the third No. 8-seeded team to get beyond the second round. Edmonton reached the Stanley Cup Finals in 2006 and Montreal reached the Eastern Conference Finals in 2010.

— The Kings now have a 10-7 all-time record in games with a chance to close out a playoff series.

— Of the 240 minutes in the four-game series with St. Louis, the Kings trailed for only 7 minutes, 42 seconds. Other than the first period of Game 1, the Kings never trailed in the series.

— The Kings recorded their first-ever playoff series win against St. Louis. The Blues swept the Kings in 1969 and in 1998.

— The Blues outshot the Kings 24-19, including 13-2 in the second period. It was the first time in this postseason that the Kings had been held to fewer than 20 shots on goal.

— Jonathan Quick stopped 23 of 24 shots. Quick allowed a total of six goals in the four-game series.

— Dustin Brown scored two goals, including an empty-net goal, to push his playoff totals to six goals and five assists. Brown had two goals and four assists in the series. In 21 career playoff games, Brown has eight goals and 10 assists.

— Jordan Nolan had one goal, his first point of the playoffs and his first career playoff point.

— Dustin Penner had one assist, his fifth assist and seventh point of the playoffs. Penner had one goal and four assists in the series. In 49 career playoff games, Penner has nine goals and 17 assists.

— Drew Doughty had one assist, his fifth assist and sixth point of the playoffs. In 21 career playoff games, Doughty has six goals and 11 assists.

— Matt Greene had one assist, his third assist and fourth point of the playoffs. In 39 career playoff games, Greene has one goal and five assists.