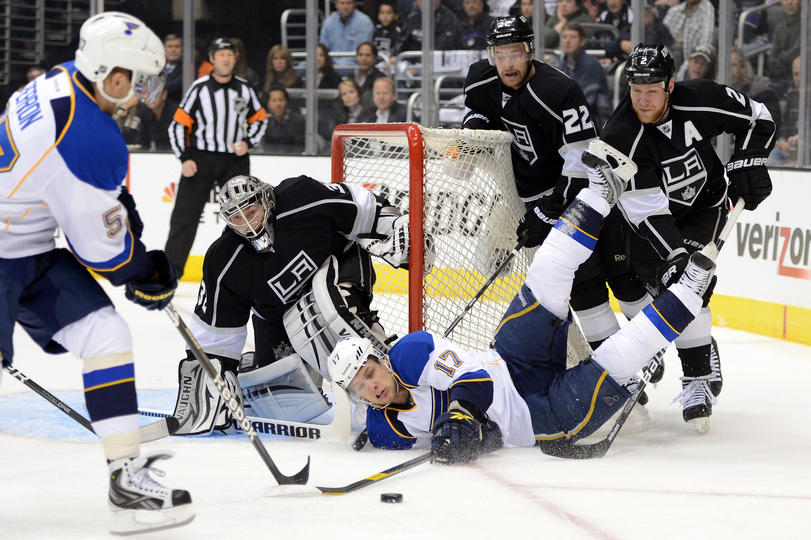 If nothing else, the St. Louis Blues can smile at the schedule. The Kings would probably prefer to play Game 4 this afternoon, if possible. But the teams will have to wait until Sunday afternoon to get back on the ice. Be sure that Blues coach Ken Hitchcock, a great orator, will be pulling out every motivational tactic he can find in the book between now and then. Based on Game 3, one would have to say that the Blues’ attempt to frustrate the Kings and bait them into bad penalties isn’t really working. The Blues tried their post-whistle stuff again early in Game 3, and Alexander Steen got sent to the penalty box for roughing less than two minutes into the game. The Blues, at times, did a better job of putting pressure right in Jonathan Quick’s face. That’s where almost all of their scoring chances come from, and that’s where Hitchcock will try to get them to be in Game 4. Here’s how the St. Louis Post-Dispatch covered last night’s game, followed by some additional postgame quotes from the Blues’ locker room…

(on the game recap…) “They outplayed us. They were better. We had stretches where we really mounted comebacks. I think, to outplay them in this building is tough. Vancouver found it too. We mounted the comeback, made it 1-1, and then gave up the quick goal again. And then when we had it 3-2, (we) miss those two great chances and we let up another goal quickly after that. They are momentum goals on their side in the three games. That’s a fine line between winning and losing. … They’re on top of their game right now. (They) have been for a little while.’’

(on taking penalties…) “In two of the three games, it’s been a major problem. Veteran players taking reactionary penalties. … We can’t beat this team when we’re sitting in the penalty box.’’

(on the game…) “It’s Game 3, and more of the same. They’ve got a team that’s playing all together as a team and sticking to the game plan, and we’re in for a while, we’re out for a while, we’re in for a while, and it just doesn’t match up. We need to look in the mirror again and decide. We’ve had some good contributions from a guy that was a healthy scratch last game [Chris Stewart], so when you get contributions like that, the guys that are in every night, the top-end guys who win our matchups, need to be better on special teams all around and (we need to) give ourselves a fighting chance.’’

(on not being able to find a comfort zone…) “They make you play uncomfortable. They come at you hard and physical. It’s the way we play when we are successful too, but for some reason we haven’t responded well to when they come at us, and it’s gut-check time. It’s win or go home. We thought about seven games at the beginning of the series and that’s what it’s going to take for us to have success. We will start with a win in Game 4.’’

(on the game…) “I think we came out in the third (period) and kind of had a no-quit attitude. I think we felt after we got that second (goal) that the third (goal) was right within our reach. It’s a tough way to go. It didn’t work out.’’