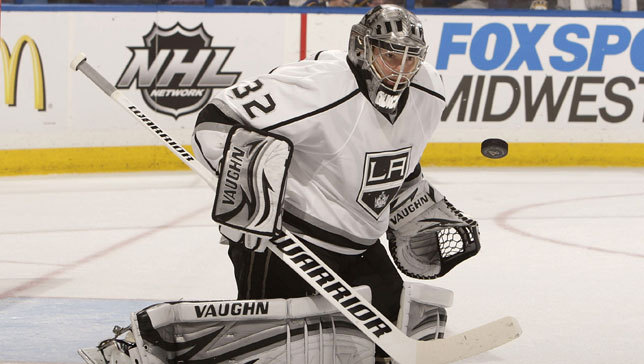 A few hours before Game 1, St. Louis coach Ken Hitchcock tried to argue that this second-round playoff series would “shock and surprise’’ people who had been expecting a low-scoring matchup between the Kings and the Blues. Well, it’s possible Hitchcock might ultimately be correct, but Game 1 delivered essentially what most expected. It was tight-checking, hard-hitting, intense hockey. Perhaps, by “shock,’’ Hitchcock meant Matt Greene’s shorthanded goal. Otherwise, it was a game that could have gone either way. Expect even more aggressive play from the Blues in Game 2. Last night, Hitchcock took his “top players’’ to task in the interview room and talked about needing to do a better job of getting to scoring areas. Count on seeing the Blues do their best to flood the slot and the front of the Kings’ net with bodies and sticks in Game 2. The Blues want to play the type of game they played in the first 10 minutes of Game 1. Can they do it again, and with consistency? The rest of the series might be determined by the answer to that question. Here’s how the St. Louis Post-Dispatch and the Belleville News-Democrat covered last night’s game, followed by some additional postgame quotes from the Blues…

(on what the officials told him about Dwight King’s hit on Alex Pietrangelo…) “They said it was a two-minute penalty. That’s what they said.’’

(on his thoughts on the hit…) “Why don’t we let the league decide if there’s anything there. We’re more concerned about our player.’’

(on Pietrangelo’s status…) “We’ll evaluate him tonight and give you an update tomorrow.’’

(on the start to the game…) “The first period was exactly what we needed. We just didn’t… We made a couple mistakes on the (Kings’) first goal. We played a great first period, but then I thought we kind of exited the game after that.’’

(on the third-period penalties…) “Well, I think the two plays were careless. The stick fouls were careless. The rest of the stuff is there. It’s part of the game. The two stick fouls were careless. I just think that, when you play Los Angeles there’s a price to pay to win. There’s a high price, and if we expect to win the next game, we’re going to have to pay a bigger price than the price we paid. And I just don’t mean physical play. I mean, they defend well, they keep you to the outside. They’ve got big defensemen. What happened in the first period is, we got to the inside. We worked hard to get there. And then we allowed ourselves to stay on the outside. They did a good job. Once they got the 2-1 lead, they kept everything to the outside. Then we shot ourselves in the foot in the third period with the penalties.’’

(on possibly having to replace Pietrangelo…) “I don’t even want to get into whether he’s going to play, or not play, or whatever. We’ll figure it out tomorrow and see how he feels and go from there. We all saw the hit, so we know what the injury is. We’ll just wait and see. We’ll see how it goes and see how he feels, and then we’ll evaluate it. But if he’s not in, then someone else gets to jump in. That’s the way it is in playoffs. You’ve got to figure it out. It’s not a six-month season; it’s a six-week season. So somebody will have to step up and elevate their game. That’s what people do. But I’m not concerned about… I’ve got better issues than replacing Petro. We need much better play from our top players, much more committed play from our top players, if we expect to move on and win a hockey game on Monday. So, for me, that’s a bigger issue than where Petro is at right now.’’

(on facing a deficit in the series…) “We’re down one-nothing. We were down one-nothing in the other series, but my concern is more about our team, and getting us to play better. Even as much as we did to ourselves in the third period, the game is right there. The game’s right there. It’s 2-1, but we’ve got to play a much more complete game. The way we played in the first period, that’s what we’ve got to do for 60 minutes if we expect to beat this team.’’

(on the game…) “We kind of took a rest and they stayed going and that’s the result. We didn’t get enough traffic after that, didn’t win enough battles, and the result is we’re digging out of another hole here.’’

(on Dwight King’s hit on Alex Pietrangelo…) “It’s a pretty good trade when their third line gets a penalty and our best player is out for the rest of the game. Hopefully he’s back for the next one. He doesn’t sit there and embellish and wait for the medic unit to come out. He’s tough and he gets up and he skates off.’’