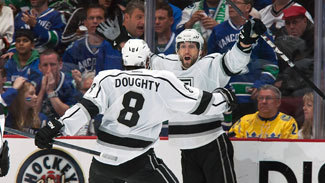 — The Kings advanced to the second round of the playoffs for the first time since 2001, as they beat the Vancouver Canucks 2-1 in overtime in Game 5 of their first-round series on Sunday night at Rogers Arena.

— This is the 10th season in which the Kings have reached at the least the second round of the playoffs, and the first time since 2001.

— This was the 10th time, since the NHL went to its current conference alignments in 1994, that a No. 8 seed eliminated a No. 1 seed. It was also the sixth time a President’s Trophy winner was eliminated in the first round since the award was established in 1986.

— The Kings now have a 9-7 record all-time in games with a chance to clinch a playoff series.

— Jonathan Quick stopped 26 of 27 shots. Quick stopped 164 of 172 shots in the series and allowed two or fewer goals in four of the five games.

— Jarret Stoll had two goals and two points in the series. Stoll has seven goals and nine assists in 40 career playoff games.

— Brad Richardson scored a goal, his first goal and first point of the series. Richardson has five goals and four assists in 23 career playoff games.

— Trevor Lewis had one assist, his first assist and second point of the series. Lewis has two goals and four assists in 11 career playoff games.

— Drew Doughty had one assist, his second assist and second point of the series. Doughty has five goals and eight assists in 17 career playoff games.