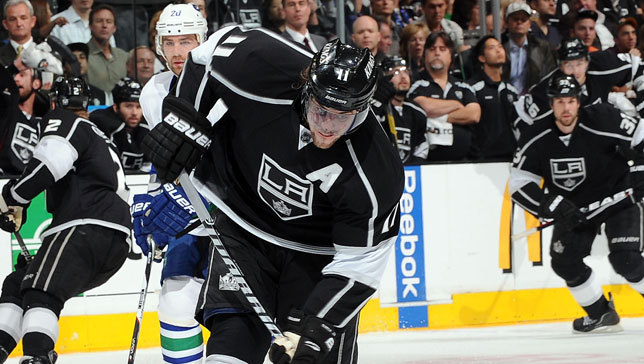 — The Kings missed an opportunity to wrap up their first-round playoff series, as they lost to the Vancouver Canucks 3-1 on Wednesday night at Staples Center.

— The Kings lead 3-1 in the best-of-seven series, with Game 5 to be played Sunday in Vancouver.

— The Kings, all-time, now have an 8-7 record in games in which they have a chance to close out of a best-of-seven playoff series.

— This is the second time in franchise history that the Kings have led 3-1 in a best-of-seven series. The Kings led Calgary 3-1 in the 1990 Smythe Division semifinals and won the series in six games.

— Dustin Brown failed to score on a third-period penalty shot, which was the second penalty shot in Kings playoff history. The Kings’ other playoff penalty shot also came against Vancouver, on April 10, 1991, when Steve Duchesne scored against Canucks goalie Kirk McLean.

— In this series, the Kings are now 2-1 when scoring the first goal, 1-1 when leading after the first period and 0-1 when trailing after the second period.

— Jonathan Quick stopped 27 of 30 shots. Quick had previously allowed a total of four goals in nine periods in this series.

— Anze Kopitar scored the Kings’ goal, his first goal and fourth point of the series. Kopitar has recorded at least one point in each game in this series. In 10 career playoff games, Kopitar has three goals and six assists.

— Justin Williams had an assist, his fourth assist and fourth point of the series. Williams has recorded at least one point in each game in this series. In 55 career playoff games, Williams has 11 goals and 22 assists.

— Willie Mitchell had one assist, his first assist and second point of the series. In 55 career playoff games, Mitchell has three goals and eight assists.