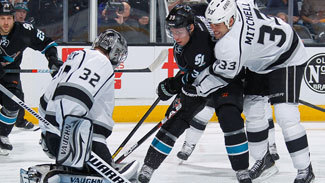 It’s tough to imagine the St. Louis Blues feeling real good about themselves right now. The Blues had an outstanding regular season and finished second in the Western Conference, but they ended the season with a 1-2-2 skid and now, in the first round, must face a playoff-tested San Jose team that finished the regular season with four consecutive victories. To be certain, the Sharks have their issues. The Kings exposed San Jose’s penalty kill in the last two games, and even though he’s a Stanley Cup champion, Antti Niemi still doesn’t inspire a ton of confidence. Still, the Sharks got it done. They were fighting for their playoff lives recently, and they went 7-2-0 down the stretch and nearly won the Pacific Division. And, because of last night’s win, the Sharks finished ahead of the Kings in the standings for the eighth consecutive season. Here’s how the San Jose Mercury News covered last night’s game, followed by some additional postgame quotes from the Sharks’ locker room…

COACH TODD MCLELLAN
(on finishing the game strong…) “Yeah. I talked this morning about the worry that we had about letting our guard down and taking that big sigh of relief. I think we did do that in the first two periods. I don’t think anybody was pleased with the way we were playing — executing, passing, power play, penalty kill, any area of the game. We talked and decided between the second and third that we were going to commit ourselves, and it ended up working out for us, so it was a good thing.’’

(on changing goalies before the third period…) “The Greiss-for-Niemi thing was something that we had talked about. Thomas hadn’t played in a while. Depending on the outcome of the Phoenix game, what was happening in our game, we talked about potentially getting him a period. Going back to the playoffs last year, Nemo played really well but we did need another goaltender at some point. The switch was to give Greiss an opportunity to play, and it also was to shake things up a little bit. So it had nothing to do as far as Nemo’s reflection on his play.’’

(on Clowe and White leaving the game in the third period…) “They’re fine. It will be good. … That wasn’t strategic. They needed to have a maintenance period, and we gave it to them.’’

(on scoring three goals after the goalie change…) “I think there’s people that wonder why the coaches flip things around. You can fall asleep. It becomes monotonous. You play four lines. You come to the bench, wait for your turn again and go. All of a sudden you start shuffling things, you don’t know who you’re going out with, you don’t know when. You’re on your toes. You come off, you’re breathing hard, you’re on your toes and ready to go again. It sometimes ignites things and sometimes get you going. It worked for us tonight.”

(on facing St. Louis in the first round…) “First of all, we’re excited about the opportunity to get there. It’s been a heck of a push on our behalf. We put ourselves in that situation. We’ll see if facing all the adversity helped us rather than cruising into the playoffs. St. Louis is a hell of a team. They were competing right to the last day for the President’s Trophy. It hasn’t been very many series we’ve entered as the underdog, and we certainly will be that. We also understand the pressure they’re under. We’ve been there. We’ve been the President’s Trophy winner and the expectations put on you are very high. We’ve played free for a little bit. Hopefully we can continue to do that.’’

(on having an “underdog mindset’’…) “We are that. Whether we want it or not, we’re that. There’s no doubt about it. We didn’t have any success against them during the regular season. They were a number of points ahead of us. We are the underdogs, and we’ll see what we do with that title. … The fact is, we didn’t play well against St. Louis this year. They’ve had our number. They’re a very good team. We’ll be going in as the underdog, and we’re going to have to relish that role. We’re going to have to go get them.’’

JOE THORNTON
(on rallying from a 2-0 deficit…) “Coach kind of came in and said you want to hit the postseason the right way. We didn’t play good in the first two periods. We just wanted to go out and see what we had in the third period, and we made it a game and then Boyle put it away in overtime. It’s a good way to go into the postseason.’’

(on whether the energy picked up late in the third period…) “Yeah, for whatever reason. We had a good third period and ended up winning the game. Our backs were against the wall once again. We just fought our way back. Good finish.’’

(on facing St. Louis in the first round…) “Great team. We’re going to have our work cut out for us. They’ve played well ever since Hitch took over. It’s going to be a good test for us.”

(on any possible letdown, after Phoenix won the division…) “Who knows? They made a push like they did in L.A. early on. They’ve got a real good team, too. It’s all over. Now we start the postseason.’’

DAN BOYLE
(on ending the season on a hot streak…) “I think we learned. Even as an old guy, you still learn every year, what works and what doesn’t. We showed a lot of character the last four or five games, getting behind in games and winning on the road. But yeah, it does start over. We want to erase what we’ve done against St. Louis this year because it wasn’t very good, but we’ve got a clean slate with them as well. But it’s going to be very demanding, a hard-fought series.’’

(on the third period…) “Just desperation a little bit. We skated a little bit more. The first period was the worst, got better in the second. Just realizing the situation and just being a little more desperate and putting the puck in the net.’’

(on his overtime goal..) “I started feeling pretty good in the third, found some energy and started skating a little bit more. Give and go with (Havlat). I actually have the worst backhand in the league probably. I believe it went off their D-man’s stick. Got a little lucky there. It is what it is. I got a big goal.’’