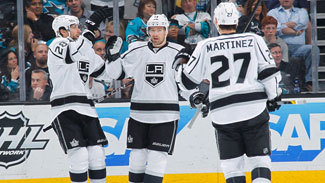 — The Kings finished the regular season with a 3-2 shootout loss to the San Jose Sharks on Saturday night at HP Pavilion.

— The Kings finished with a 40-27-15 record, for 95 points, and finished third in the Pacific Division and eighth in the Western Conference. Last season, with 98 points, the Kings were fourth in the division and seventh in the conference.

— The Kings finished the season series against San Jose with a 2-1-3 record, including one overtime loss and two shootout losses. The Kings are 0-2-2 in their last four games at San Jose.

— The Kings outshot the Sharks 31-23, including 15-5 in the first period. The Kings have outshot their opponents in 13 consecutive games.

— Jarret Stoll had a power-play assist, his 15th assist and 21st point of the season. Stoll has one goal and one assist in his last two games.

— Alec Martinez had a power-play assist, his sixth assist and 12th point of the season. Martinez has two goals and two assists in his last five games.