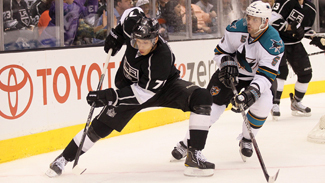 Independent of the Ryane Clowe fiasco, there’s a reason why Darryl Sutter referred to San Jose as the “favorite’’ in the division, even now, and a reason why the Kings were no doubt relieved to see Nashville take down Dallas last night. The Sharks, for all their baffling stumbles this season, are still a tough, tough team. When a team, in game 81, battles back from deficits of 1-0, 3-1 and 4-3, there is undeniable skill and mental toughness. Neither goalie really distinguished himself last night, but the Sharks found some life after Joe Thornton’s power-play goal late in the third period made it a 3-2 game, and then they turned in an excellent third period. A week ago, the Sharks were in grave danger of missing the playoffs. Then they turned in two season-saving victories over Dallas. Now, if Phoenix should stumble, the Kings and Sharks would play Saturday for the Pacific Division title. It’s fair to say that everyone outside of the Coyotes’ fan base would love to see that. Here’s how the San Jose Mercury News covered last night’s game, followed by some additional postgame quotes from the Sharks’ locker room…

COACH TODD MCLELLAN
(on the game…) “I knew there was going to be a lot of emotion. I thought it was going to be a hard game. I didn’t anticipate us scoring five. I didn’t count on us giving up five as well. So there’s a lot more offense in it than I thought there would be. Most of it came from special-teams situations. It was a heck of a game, a lot of emotion. The fans were in it, a playoff-type atmosphere.”

(on making the playoffs and getting the win…) “For the fourth night in a row, I’m going to say the same thing. We’re not going to get too high and we don’t get too low. We’ll rest tomorrow and then we know we’ve got another big game to play. I’m glad that game will really mean something because it will set us up and, I’m sure, L.A. up for a good playoff run.”

DAN BOYLE
(on the game…) “That was a crazy game, man. Down 3-1, we battled back. They got another one, we took the lead. It was a pretty entertaining game for the fans and it was a hard-fought win. We showed a lot of character.”

(on clinching a playoff spot…) “We knew after the first that Dallas and Colorado had lost so (there was) a little bit of relief. Obviously we wanted to win this game and give ourselves a chance at getting that third seed and we’re giving ourselves a chance obviously.”

RYANE CLOWE
(on the game…) “I think it was one of those games where I think both teams took more penalties than they probably usually do. They’re a top PK team, we’re one of the top PP teams and we were fortunate that our power play was really good tonight, obviously. That sort of game tonight was not really expected but we went at each other hard. … It was a playoff game. Playoff atmosphere, emotion. Physical. We played pretty well, seeing as we played L.A. last year in the playoffs. There’s a lot on the line, obviously with the division, but one of the things was our character tonight, how we battled thought it.”

(on whether he touched the puck while on the bench…) “I have no idea what you guys are talking about. I’ll have to see the video or something. Someone show me the video.”