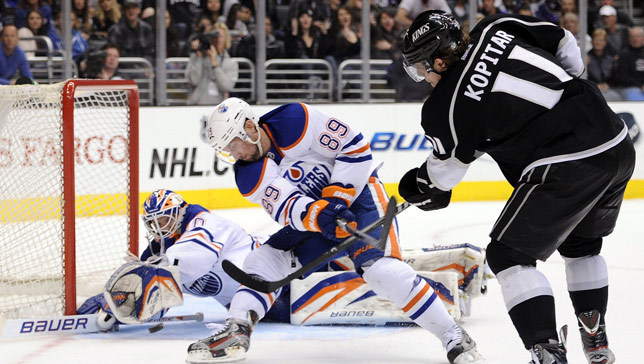 It’s been a long, difficult season for Edmonton coach Tom Renney. Renney might only have two games remaining in his tenure with the Oilers, so some frustration is understandable. But for Renney to come out, after last night’s game, and suggest that the Oilers didn’t get more calls because “maybe they [the NHL] need Hollywood in the playoffs’’ is not fair. It’s not fair to the league, nor the officials, nor the Kings, who played a better game than the Oilers. Renney is a good man, much better than that, and the Kings won’t shed any tears on behalf of the Oilers, given the number of questionable calls the Kings have been on the wrong end of recently. Outside of Staples Center, the Oilers were the most popular team in the NHL last night. Within the NHL, that is. Legions of loyalists in San Jose, Phoenix, Dallas and Colorado were all cheering for the Oilers to knock off the Kings, but two third-period goals dashed the hopes of a lot of folks. The Oilers finish the season with games against Anaheim and Vancouver, the latter of which could help determine the No. 1 seed in the Western Conference. Here’s how the Edmonton Journal and Edmonton Sun covered last night’s game, followed by some additional postgame quotes from the Oilers’ locker room…

Kings upend Oilers, even as Dubnyk stands on his head again (Edmonton Journal)

COACH TOM RENNEY
(on the game…) “Well, they’re good at home and again they’re a desperate team and they’re certainly going to stick to their game plan and hope that their opponent, us in this case, makes the odd mistake to give them a chance and that’s what we did.”

(on Devan Dubnyk’s play…) “Really solid, again. Big and strong and in command of the net in the circumstance, no question. We battled tonight for him, too. It’s not an easy night for him by any stretch of the imagination. But if you look at our roster, we did everything we could to be responsible in our own end and look to get the job done.”

SAM GAGNER
(on the game…) “It’s an exciting challenge for us. It’s a situation where we can come in here and play as close to playoff hockey as we’re going to get this year. We want to help the guys that are coming up out and make sure that everyone is pulling their weight. It’s tough when you have injuries but I think we need to make sure that everyone steps up in those absences and plays even better.”

(on the game…) “It’s a tough loss. I think we didn’t do a good enough job playing in their end and getting some sustained pressure. I think if you want to beat a team like that, who is playing desperate hockey, you’ve got to play in their end a little more. You’ve got to get pucks in deep and force their defense to turn pucks over and we didn’t really do that tonight and we’ve got to learn from it.”