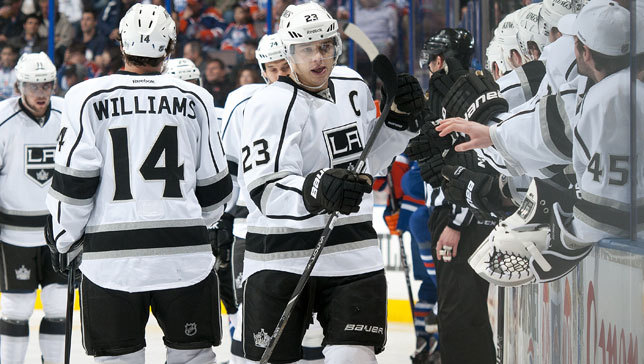 — The Kings moved back into first place in the Pacific Division as they beat the Edmonton Oilers 4-1 on Friday night at Rexall Place.

— The Kings, with four regular-season games remaining, have 90 points, one more than Dallas (seventh place in the Western Conference) and Phoenix (eighth place) and two more than San Jose (10th place).

— The Kings allowed a season-low in shots on goal, as they outshot the Oilers 32-14, including 15-4 in the third period. The previous low this season was 15 shots on goal, by Detroit on March 9.

— Jonathan Quick stopped 13 of 14 shots. Quick has allowed one or zero goals in four of his last five games.

— Anze Kopitar had one goal and one assist, to push his team-high totals to 25 goals and 44 assists. It was his team-high 17th multi-point game fo the season. Kopitar has five goals and six assists in his last nine games.

— Drew Doughty had one goal, a power-play goal, his 10th goal and 36th point of the season. Three of Doughty’s goals this season have come on the power play. Doughty has two goals and six assists in his last nine games.

— Alec Martinez had one goal, his fifth goal and ninth point of the season. Martinez has scored three goals in his last eight games.

— Dwight King had two assists, to push his season totals to eight assists and 12 points. It was King’s third multi-point game of the season, and of his career.

— Matt Greene had two assists, to push his season totals to 11 assists and 15 points. It was Greene’s second multi-point game of the season.

— Willie Mitchell had one assist, his 15th assist and 20th point of the season. Mitchell has one goal and one assist in his last two games.

— Justin Williams had one assist, his 36th assist and 55th point of the season. Williams has six goals and six assists in his last 13 games.

— Dustin Brown had one assist, his 29th assist and 49th point of the season. Brown has one goal and one assist in his last two games.