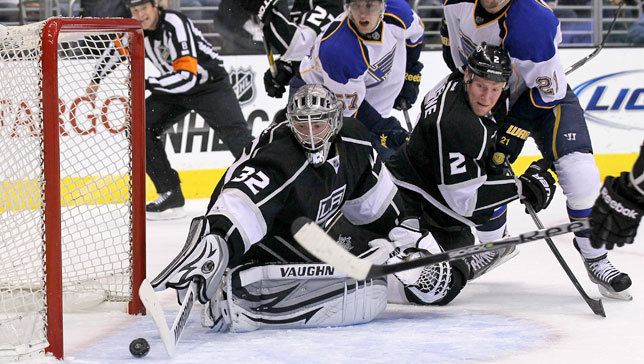 Back in mid-October, the Kings played their Staples Center home opener against the St. Louis Blues and won 5-0. This is not the same St. Louis team. It’s mostly the same players, in the same uniforms, but it’s not the same team. The Blues put on an absolute hockey clinic in the first period last night. They skated hard, they took the body, they recovered the puck in the offensive zone and they supported each other with quick, aggressive plays in the offensive zone. That’s not even mentioning goalie Brian Elliott, who might have recorded a shutout even if the Kings were allowed to play with two pucks. The playoffs are a different animal, of course, but it’s hard to imagine a team being confident about having to beat the Blues four times in seven games. Of course, the Kings were able to beat them three times in four games, including two out of three after their early-season coaching change. All around, the Kings and Blues put forth a classic last night. Here’s how the St. Louis Post-Dispatch covered last night’s game, followed by some additional postgame quotes from the Blues’ locker room…

Blues lose to Kings in shootout

BRIAN ELLIOTT
(on the game…) “It was a tight game. We knew that coming into it, (it) would pretty much be like a playoff game. (The Kings) are playing for their playoff lives, so we just tried to create our own storm, create our own offense. It was…a hard-fought game. It came down to a shootout. We have just got to keep working.

“We all played together. We played for each other for a full 60 minutes. We just have to build on that and we’ll get our scoring chances that we’ll start to bury (them) again.

“(The Kings are) going to have to play 100 percent the rest of the season to solidify their spot. They’re going to play like that the rest of the year, I’m assuming. We got a point here but we can’t be happy with it, but we have just got to put it in our back pocket and move on to the next game. … It’s a hard-fought game. It’s always disappointing when you don’t get the two points, but when you come here on the road it’s a tough building to play (in). They’re playing well. We have just got to take that point and move on and get ready for the next game, because it’s just going to be as tough as it was tonight.’’