[UPDATE: Jonathan Bernier will once again be able to wear the “Hollywood” mask. Christine Sovich, a lawyer who represents the organization the licenses the Hollywood sign, wrote to me in an email this afternoon that no further action will be sought against Bernier and that he is free to wear the mask without paying any fee. Here’s the story anyway…]

Per the request/demand of those responsible for overseeing/maintaining the iconic “Hollywood’’ sign, atop the Santa Monica Mountains, Kings goalie Jonathan Bernier has had to (at least temporarily) cover the likeness of the sign that has been painted on the side of his helmet. Turns out, the Hollywood Chamber of Commerce charges a licensing fee for the commercial use of the sign in things such as movies and television shows. And, apparently, goalie masks. According to Bernier, someone from the organization saw Bernier’s mask pictured in the Los Angeles Times earlier this season, and complained.

Goalie-mask designs must be approved by the league, and Bernier’s passed inspection. Bernier and the league were unaware of the issue until the complaint was filed. “It’s nobody’s fault, really,’’ Bernier said.

For now, Kings head equipment manager Darren Granger has covered the sign with a Kings logo, but it could return. Bernier said it’s possible that the licensing fee will be paid, rather than the entire helmet being repainted or replaced entirely. “It’s, how much are the fees?” Bernier said. “The fee is, I’m guessing, about $500. It’s probably $2,500 to make a new helmet. So I think you’re better off paying the fee. So I think that’s what they’re trying to figure out.’’ 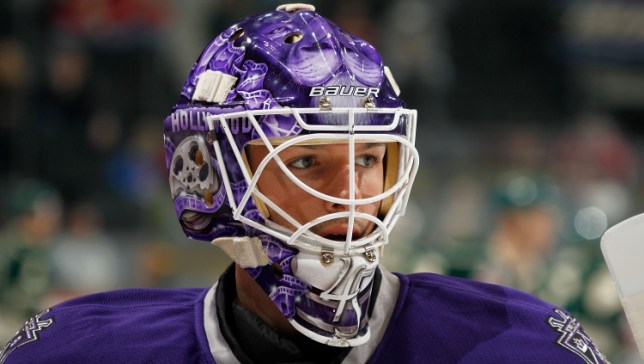