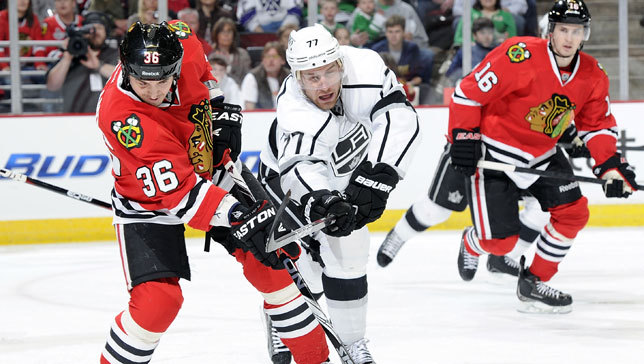 — The Kings finished their four-game road trip with a win, as they beat the Chicago Blackhawks 3-2 in a shootout on Sunday night at United Center.

— Mike Richards scored the only goal of the shootout, and Jonathan Quick made six saves. The Kings improved their shootout record to 5-7 this season. They had lost five of their previous six shootouts.

— The Kings, with 76 points, moved into ninth place in the Western Conference, tied in points with eighth-place Calgary and 10th-place Colorado.

— The Kings finished the season series against Chicago with a 3-1-0 record. The Kings went 0-4-0 against the Blackhawks last season.

— Jonathan Quick stopped 35 of 37 shots in regulation and overtime — including a third-period penalty shot by Viktor Stalberg — and all six Chicago attempts in the shootout. Stalberg’s penalty-shot attempt was the first penalty shot by a Kings opponent this season. Quick has allowed two or fewer goals in 38 of his 58 starts.

— Slava Voynov scored a goal, his fifth goal and 15th point of the season. Voynov has one goal and three assists in his last six games.

— Jeff Carter scored a goal, his 19th goal and 30th point of the season. Carter has four goals and one assist in eight games with the Kings. Carter’s goal was the 200th of his career.

— Justin Williams had one assist, his 31st assist and 47th point of the season. Williams has four goals and three assists in his last seven games.

— Dwight King had one assist, his fifth assist and eighth point of the season. King has two goals and three assists in his last six games.

— Dustin Brown had one assist, his 24th assist and 43rd point of the season. Brown has recorded at least one point in each of his last eight games, with five goals and seven assists. Brown had three goals and two assists in four games against Chicago this season.

— Mike Richards had one assist, his 21st assist and 35th point of the season.