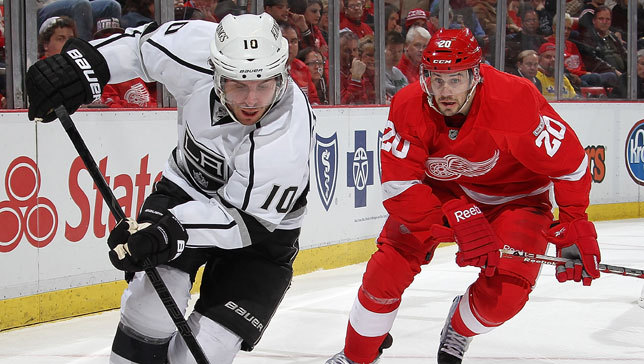 — The Kings blew a one-goal lead in the final five minutes of the third period and lost to the Detroit Red Wings 4-3 on Friday night at Joe Louis Arena.

— For the first time this season, the Kings lost in regulation when they scored at least three goals. The Kings previously had a 20-0-2 record when they scored more than two goals in a game.

— With one game remaining in the season series, the Kings have an 0-3-0 record against the Red Wings this season and have been outscored by a combined margin of 16-6. The Kings have allowed more than three goals in a game only 10 times this season. Three of those games have been against Detroit.

— The Kings went 1-for-4 on the power play and 3-for-3 on the penalty kill. The Kings have not allowed a power-play goal in eight consecutive games and have killed 26 consecutive penalties.

— Jonathan Quick stopped 11 of 15 shots. Quick has allowed four goals in each of his last two starts, and has allowed 11 goals in 6 1/2 periods against the Red Wings.

— Jeff Carter had one goal (on the power play) and one assist, to push his season totals to 18 goals and 11 assists. Carter has two multi-point games in seven games with the Kings.

— Dwight King had one goal, his third goal and seventh assist of the season. King has two goals and two assists in his last five games.

— Anze Kopitar had one assist (on the power play) to push his team-high totals to 38 assists and 58 points. Kopitar has recorded at least one point in six consecutive games (three goals, four assists).

— Dustin Brown had one assist, his 23rd assist and 42nd point of the season. Brown has recorded at least one point in seven consecutive games (five goals, six assists).

— Willie Mitchell had one assist, his 13th assist and 17th point of the season. Mitchell has three assists in his last three games.