The view from Nashville 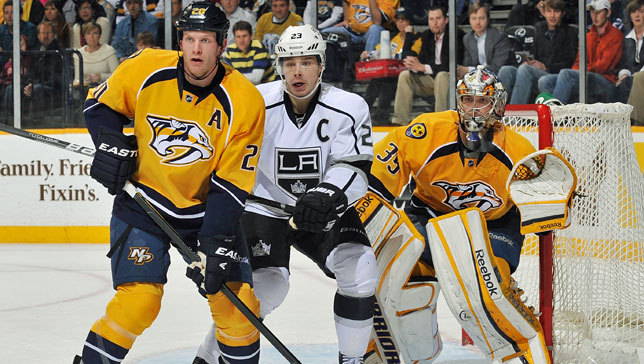 Nothing good can last forever. The Nashville Predators hadn’t lost at home in regulation in more than two months — they were 10-0-2 since Jan. 5 — and goalie Pekka Rinne had allowed two or fewer goals in each of his previous eight games. The Predators clearly would love to have home-ice advantage in at least the first round of the playoffs — they seem to respond well to their increasingly-loud home fans — but they missed an opportunity last night to move within four points of fourth-place Detroit. Still, the Predators, with their strong goaltending and defense and their balanced group of forwards who can skate well and pass accurately, will be a tough playoff matchup for any team. The Kings face the Predators once more this season, the night after the Kings play at Anaheim, so that figures to be another tough game. Here’s how The Tennessean covered last night’s game, followed by some additional postgame quotes from the Predators’ locker room, courtesy of The Associated Press…

COACH BARRY TROTZ
(on pulling goalie Pekka Rinne…) “To me, it just wasn’t Peks’ night. We weren’t helping him a whole lot. You have to help him in the crease area. Four (goals) is usually my limit with Peks, and I thought we still had a lot of game to go with, and I thought I would give him one more.’’

PATRIC HORNQVIST
(on the game…) “We got close. I thought after that, it was all about us and they backed up. In the neutral zone, they took away our speed. We can’t let five goals in a game. We need to clean up defensively.’’