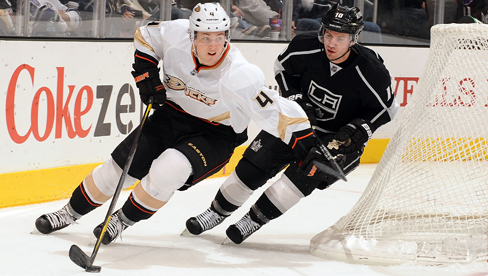 What a remarkable run this has been for the Anaheim Ducks. Given up for dead at the turn of the calendar year, when they had a 10-22-6 record, the Ducks have gone 18-6-4 since Jan. 4, to pull themselves back into the playoff race. The Ducks still aren’t out of it, but they are now seven points behind eighth-place Dallas, having dropped two of their last three games. Just to get to 92 points — no assurance of a playoff spot — the Ducks would need a 13-3-0 finish, or the equivalent thereof. That’s why last night’s game was so big for the Kings and Ducks. Afterward, perhaps some of the frustration came out on the Ducks’ side. Coach Bruce Boudreau is likely to find his bank account a little lighter. After the game, he had harsh criticism for the on-ice game officials, as detailed below. Here’s how The Orange County Register covered last night’s game, followed by some additional postgame quotes from the Ducks’ locker room…

COACH BRUCE BOUDREAU
(on the special-teams battle…) “Our special teams were horrible. We can’t kill a penalty and we can’t score a goal on the power play. That being said, they were some of the worst calls that I’ve seen in a long time. In a game of this importance, we can’t have officiating making calls like that. There were three penalties that weren’t penalties, I know of, that we took. Granted, they scored and (it’s) probably sour grapes that they scored, but those things can’t happen. It’s too important and there is too much at stake for everybody not coming to do their job, whether it’s us guys or whether it’s the other guys over there.’’

(on not normally speaking about bad calls…) “No, I’ve held it in all year because all year there are things; everybody makes mistakes. If we are busting our (butts) all night long and playing our fifth game in seven nights, we needed better from them. I don’t know what their schedule is, but if it’s four nights in a row or what have you, we can’t have that. It’s just bad calls and I haven’t paid too much attention to whether (the Kings) deserved their calls, but I know the calls on Sbisa’s slash, Bonino’s interference and Hagman’s trip were not penalties, not even close.’’

(on bad calls bring down level of play…) “What is does is that it gets everybody frustrated on the bench and then they lose their focus and start yelling at the referees. The referees start yelling back and so the focus on the game is gone. It’s a big part of it.’’

RYAN GETZLAF
(on the game…) “It’s a tough one. We’re pretty disappointed in this locker room, mostly with our effort. We weren’t as good as we needed to be to play tonight. They came out and played a strong game and we didn’t respond the way we needed to, especially on our special teams.’’

(on the Ducks’ mindset…) “We are excited. We’re excited to play every night. We’re excited to get back in this thing and we are working hard to get there. It’s just that we lost the special-teams battle tonight and that was the difference in the hockey game.’’

(on the odds not being in the team’s favor…) “(The odds) haven’t been in our favor since Christmas. There is no doubt in here that we can still make this thing happen and we have to go in and get ready tomorrow and get ready for Monday. Our group has never stopped believing this whole time and we aren’t going to now.’’