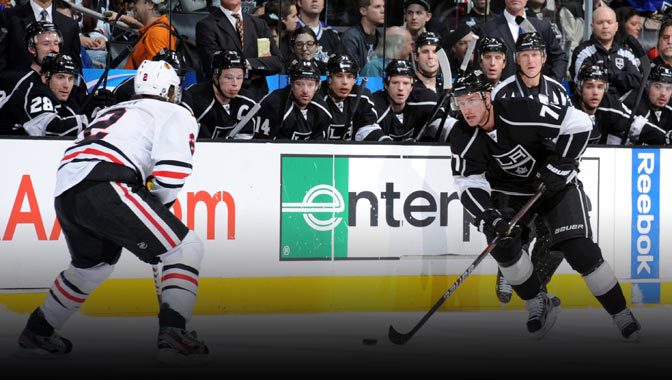 In the last month, has there been more of a hard-to-figure team than the Chicago Blackhawks? They had a nine-game winless streak, then a four-game winning streak, and now have dropped back-to-back games and didn’t really distinguish themselves in either one. To be certain, injuries have played a big part — captain Jonathan Toews is out of the lineup — but the Blackhawks are all over the place. They allowed a total of four goals in impressive wins over the Rangers, Blue Jackets, Blues and Red Wings, and now have allowed seven goals in losses to Dallas and the Kings. If the Blackhawks can get back to full health, and get stable goaltending, they will be a team nobody wants to face in the playoffs. Here’s how the Chicago Tribune and Chicago Sun-Times covered last night’s game, followed by some additional postgame quotes from the Blackhawks’ locker room…

COACH JOEL QUENNEVILLE
(on the Blackhawks’ power play…) “I think the power play really took a lot of momentum out of our game. They scored early on their power plays and they got two and we lost our team game on account of that. … Overall, it was tough watching it.”

(on the Blackhawks’ level of desperation…) “Well, you could say our desperation wasn’t where it needed to be. I think we lost our confidence and pace in our game because the power play has been having a tough go and it’s slowing us down.”

(on Corey Crawford in goal…) “He’s fine. It wasn’t his fault. I’m not blaming him at all. But I thought Ray (Emery) did a nice job.”

BRENT SEABROOK
(on the game…) “Every point’s huge for us right now, and we dug ourselves a huge hole and we’ve got a young team. We didn’t have the performance we wanted tonight and I thought L.A. came out early and turned on the PP. They buried a couple early on us and our response wasn’t there.”

(on the Blackhawks’ power-play struggles…) “We’ve got to work harder on it. We’ve got to work together and do a better job of getting in front of the net, getting our shots from the point as defensemen. We’ve got to outwork the PK and do it for a full two minutes. It’s frustrating because we’re just not working hard enough on the PP and we had some good looks tonight, but Quick was good and their forwards were doing a good job of getting in lanes. And we need to work harder to do a better job.”

PATRICK SHARP
(on the game…) “There’s room for more offensive chances. There are ways to get stronger and get more pucks to the net. There’s nothing really more to say; we’ve got to find a way to put one in the back of the net. We need to get some guys on it, and do the things that we’re doing and find a way to get it in the back of the net and it’ll be a huge positive for us.”

(on the power-play struggles…) “The frustrating thing is that we’ve had success on it in the past and we’ve tried different things and we’ll continue to do that, so there is no point in hanging our head and feeling sorry for ourselves. We just have to find a way to make a difference on it.”

(on playing Anaheim tomorrow…) “It’s a positive we have a game tomorrow. We can put this one behind us starting right now and gear up for Anaheim. The last couple games, we’ve played teams that are fighting for a playoff spot and are close in the standings. There’s a lot on the line, and we know that and need to be ready to go tomorrow.”