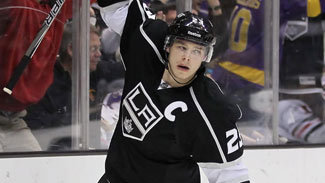 — Dustin Brown recorded the first hat trick for a Kings player this season, and the Kings beat the Chicago Blackhawks 4-0 on Saturday night at Staples Center.

— Brown also had one assist, and pushed his season totals to 17 goals and 18 assists. Brown scored two power-play goals in the first period and a shorthanded goal in the second period. Brown recorded the third hat trick of his career and tied his career-high with a four-point game. Six of Brown’s 17 goals this season have been game-winning goals. It was Brown’s sixth multi-point game of the season. Brown has four goals and two assists in his last three games.

— The Kings have a 17-0-2 record this season when they score at least three goals in regulation/overtime.

— The Kings went 2-for-3 on the power play and 6-for-6 on the penalty kill. The Kings have a 20-6-3 record this season when they score at least one power-play goal.

— Jonathan Quick made 19 saves for his seventh shutout of the season and his 21st career shutout. The Kings’ single-season record for shutouts is eight, set by Rogie Vachon in 1976-77. Quick has not shut out the Blackhawks in two consecutive meetings.

— Willie Mitchell had one goal and one assist, to push his season totals to four goals and 10 assists. It was Mitchell’s first multi-point game of the season. Mitchell has one goal and two assists in his last three games.

— Alec Martinez had one assist, his second assist and fourth point of the season. Martinez has two assists in his last three games.

— In his Kings debut, Jeff Carter played 17 minutes, 16 seconds. He recorded four shots on goal, one hit and won 1 of 2 faceoffs.