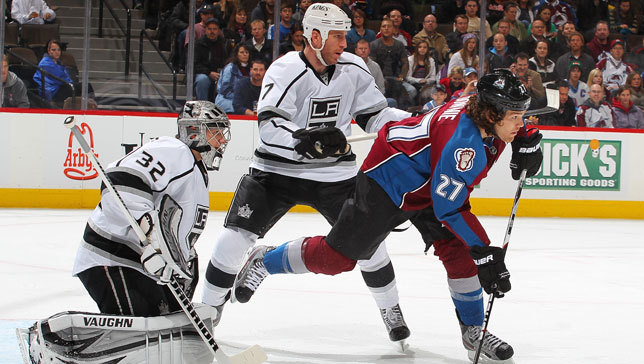 — The Kings allowed three first-period goals and couldn’t rally, as the lost to the Colorado Avalanche 4-1 on Wednesday night at Pepsi Center.

— The Avalanche completed a sweep of the four-game season series against the Kings, as they went 4-0-0, with one of the wins coming in a shootout. The Avalanche outscored the Kings by a combined margin of 12-5. The Kings swept the Avalanche last season.

— This is the first time this season that the Kings have allowed four goals in consecutive games. Before Tuesday’s game at Phoenix, the Kings had allowed more than three regulation/overtime goals in only six of their first 59 games.

— The Kings completed their 11th set of back-to-back games this season (four more remain). The Kings have a 3-4-4 record in the second game.

— Jonathan Quick stopped 8 of 11 shots in the first period, then was pulled in favor of Jonathan Bernier, who stopped 15 of 16 shots in the final two periods. It was the third time, in 52 starts this season, that Quick was pulled from a game. Quick has now allowed seven goals in his last three periods. He had allowed a total of six goals in his previous 13 periods.

— Dustin Brown scored the Kings’ goal, for his 15th goal and 32nd point of the season. Brown has two goals and one assist in his last two games.

— Drew Doughty had an assist, for his 21st assist and 27th point of the season. Doughty has a goal in each of his last two games.

— Mike Richards had an assist, for his 17th assist and 31st point of the season. Richards has three assists in his last two games.