The view from Arizona 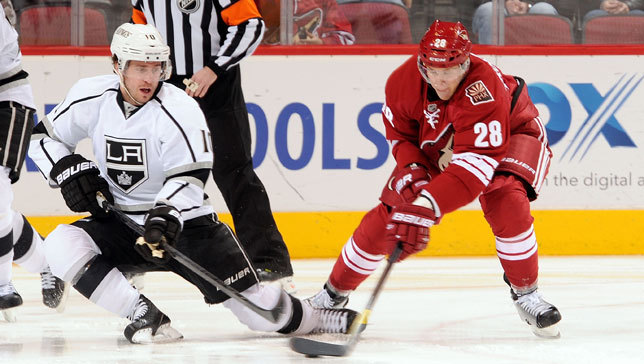 In recent days, when talking about Anze Kopitar and Dustin Brown, in particular, Darryl Sutter has stressed the need for the Kings to get the most from their best players. After last night, Sutter doesn’t need to say anything more. He can simply take the stat sheet, highlight three names and distribute it as evidence. Radim Vrbata: two goals, one assist. Shane Doan: two goals. Martin Hanzal: three assists. The Coyotes, arguably, only have three truly threatening offensive players, and every one of them came up big last night, in a huge game for the two Pacific Division rivals. The Coyotes are hobbled, and had to deal with a rare stinker from goalie Mike Smith, but they fought through it with veteran leadership and tenacity. Here’s how The Arizona Republic covered last night’s game, followed by some additional postgame quotes from the Coyotes’ locker room…

COACH DAVE TIPPETT
(on rallying back to win and how it helps the psyche…) “It’s a good learning experience. You have a team that we knew they were going to come in and come right after us. I certainly didn’t like our response at the start. We were slow to pucks. We were non-competitive in battles. Of the three goals they got, two of them were on deflections that sometimes go in and sometimes don’t. I thought we were non-competitive throughout our group, so we had to make a couple adjustments in the second. After we came back and played well in the second, we got ourselves back in the game. So basically we just said, ‘They won the first, we won the second, who’s going to win the third?’ We ended up getting the points.”

(on games like this can have an impact long-term…) “You hope it does, because it continues to build the belief system that you can win. You can win when things are going well and you can win when there is some adversity in front of you. Like I say, there are some good learning experiences for us there and we’re going to need that.”

SHANE DOAN
(on the game…) “It’s one of those ones where you’re down three to nothing to a team that we have to find a way to win. Obviously we weren’t happy with the first (period) but to rally and come back the way we did, I felt that our (power play) was huge tonight. It hasn’t been good for us a lot of nights but tonight it was.”

(on Mike Smith’s game tonight and being able to help him out…) “He’s been absolutely phenomenal and, I mean, tonight he was huge, he played really well. He didn’t like his first period, none of us did, but realistically there wasn’t much he could do on those goals. He might want the second one back but the rest of them, there’s not much you can do, and he shut the door and then in the shootout he wins it for us. We are so thankful for him and that he plays so well for us. Our goaltenders have been so good for us. We want to help them out whenever we can.”

RADIM VRBATA
(on rallying to win…) “(It was) a big win, a big two points. We didn’t have the start we wanted and we knew that they would come out hard and they did. We were flat in the first (period) but after the first we talked in the dressing room about how we wanted to make a … comeback and, you know, we scored a good goal there in the second. (It was) a big effort, especially against [Los Angeles).”

(on the mentality of not settling for just one point, but instead going for two…) “I think the momentum just switched a little bit. As you said, we tied it and we wanted to get more. We hope to get more because they are right behind us in the standings so that was an important point.”

KEITH YANDLE
(On whether this might be the best win of the season so far considering how the game started…) “Yeah, absolutely, I think it shows a lot about our team and the way that we’ve been playing as of late. I mean, at the beginning of the year we were losing games last minute or in overtime. Lately we’ve been finding a way to play good hockey and come together and it’s been fun and it’s been fun on the road.”

(on tying San Jose in points, and what it does to the team’s psyche…) 11It’s something that everybody looks at and everybody mentions it, and it’s just something that we almost try to keep out of the locker room a little bit. You just worry about your own team and what we’re doing. We just try to win games every night and, you know, that’s what we’re here to do.”