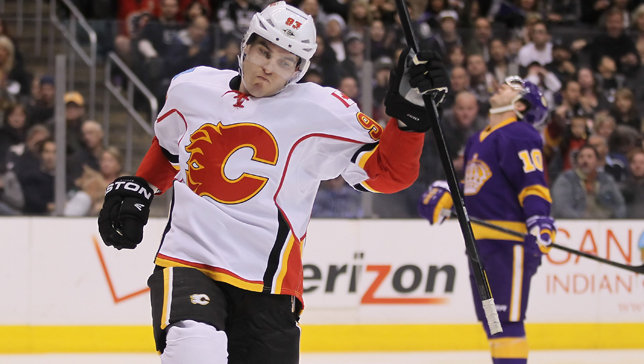 For the second time in three nights, a team came into Staples Center and showed the Kings how playoff-race hockey is supposed to be played. As the score indicated, the margin between the Kings and Calgary Flames last night was very slim, but consider that not only were the Flames playing at home, but they have been decimated by injuries of late. Given their group of forwards, it stood to reason that the Flames would have to get superb goaltending and hope to catch a break or two. That’s exactly what happened. Miikka Kiprusoff was consistently strong and occasionally brilliant, and Michael Cammalleri alertly knocked in a weird-bounce pass from Tom Kostopoulos. The Flames were far from beautiful on the ice, but they did enough to record a huge victory and leapfrog the Kings in the standings. Here’s how the Calgary Herald and Calgary Sun covered last night’s game, followed by some additional postgame quotes from the Flames’ locker room…

COACH BRENT SUTTER
(on Miikka Kiprusoff…) “He was outstanding again. That’s just the way he is. He makes those saves for us, especially those first ones. We did a really good job of not giving those second and third opportunities up. He made some big first saves, obviously, for us throughout the night. It’s just what you expect from Kipper.’’

(on moving into eighth place in the West…) “It was obviously a big game tonight to be able to come and the ability to get a victory and knowing that Phoenix had won. You take it a game at a time. We have a lot of work left and we just need to pick away and it’s going to be a battle right to the end. Every point you can get along the way is huge.’’

TOM KOSTOPOULOS
(on Miikka Kiprusoff’s performance…) “Same as he’s been all year for us. He’s a game-changer. He’s been like this all year. Hopefully we don’t take it for granted, but he’s unbelievable.’’

(on his line’s play…) “We felt pretty good as a line. We kept talking all night that we’re getting chances. Comeau was really skating hard ad making things go to the net. Cammalleri was all over the middle of the ice, making things happen. It was kind of a lucky bounce, but we got that one.’’

(on the win…) “Yeah, it was a big win. Everyone’s happy, but we have to get back on that plane and get home. We have a big game against Edmonton. They’ve been playing well and every game is such big points so it will be a crucial game on Tuesday.’’

JAROME IGINLA
(on Miikka Kiprusoff’s performance…) “He’s played as good as I’ve seen him play in his career, and that’s counting the Vezina year. All year he’s been outstanding, it’s amazing. He’s having the best year that I can remember. He’s enjoying it too, though.’’

(on moving into eighth place in the West…) “It’s a big step for us. We look at it as, if it didn’t go our way tonight, we could be four points out again by two teams. (We) had kind of been getting close and getting close. To finally get there is a big step for us. We believe that we are going in the right direction. We’ve played some tough games and tough teams, different style games, road games, and we’ve been chipping away and stuff. It feels good. It’s been a long time. I don’t think we’ve been in a playoff spot all year.’’