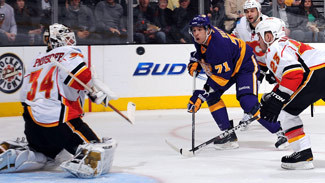 — The Kings were shut out for the eighth time this season, as they lost to the Calgary Flames 1-0 on Saturday night at Staples Center.

– The Kings fell into ninth place in the Western Conference, tied in points with eighth-place Calgary but behind because of the regulation/overtime-wins tiebreaker.

– The Kings had been 4-0-1 in their previous five games against Calgary.

– Jonathan Quick stopped 17 of 18 shots, and had his goals-against average fall from 1.89 to 1.87 in the loss. Ten times in 50 starts this season, Quick has allowed one goal in regulation and not recorded the victory. He has suffered four 1-0 regulation losses and six 2-1 overtime/shootout losses. In Quick’s 26 losses, the Kings have scored a total of 29 goals. Eighteen of those losses have been in one-goal games.