Can Loktionov turn positives into points? 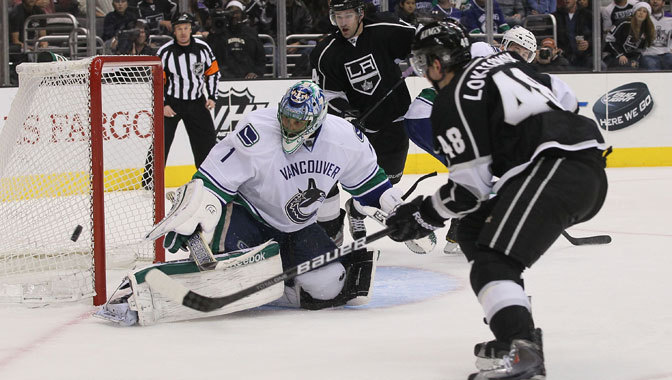 In terms of the Kings’ offensive wish list, the number-one item would still be getting some of the veteran forwards back on track, and scoring at a rate even close to their career averages. A secondary item, though, would be getting some production out of rookie Andrei Loktionov, who has shown strong games here and there but has yet to be a consistent threat on offense. Loktionov was a reliable scorer in Manchester, but with the Kings he has four points (all on assists) in 31 games, and he has not recorded a point in his last 14 games. Loktionov is considered more of a playmaker than a sniper, and for the most part, he’s been playing between some combination of Kyle Clifford, Trevor Lewis and Brad Richardson — not exactly three snipers themselves — but the feeling is that Loktionov has yet to tap his potential. Still, Darryl Sutter said he sees all-around positives from Loktionov and likes that potential.

SUTTER: “He’s been good. We talked to him after we sat him out in St. Louis. It wasn’t based on performance. It was sort of based on the centermen down the middle with St. Louis, and how they were going to play. It was for him to watch and see if he could see anything that could help him. The perception was that he wasn’t good defensively or that he didn’t compete in his own zone. Quite honestly, I’ve seen zero of that. The only time he has problems — and it’s just a drift-back — is, instead of turning and going, it’s bringing it back and going into the formations that he was used to playing when he was a kid. That’s the only time he has any trouble. I know his size will be an issue, but if you keep him with speed, you try to get him to understand to be `first in, first out.’ Then he’s protecting himself. He’s been pretty receptive.’’