Will Bernier be a bargaining chip for Kings? 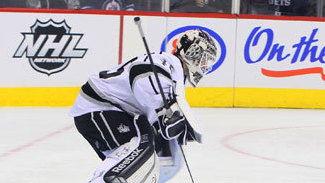 With the trade deadline now less than three weeks away — Feb. 27, to be specific — talks between general managers figure to increase in intensity and frequency by the day. Dean Lombardi’s standard pose these days is some variation of standing with his Blackberry to his ear. Will any of those talks involve Jonathan Bernier? It’s a tough situation for the Kings. Bernier and Jonathan Quick are both under contract for one more season — Quick will be an unrestricted free agent in 2013; Bernier a restricted free agent — and Quick has established himself as one of the NHL’s top goalies. Bernier is well-regarded and plenty of teams need goalie help. But is it that simple?

First, what would Bernier’s value be? It’s probably higher among those who follow the Kings regularly, who (in large number, at least) believe that Bernier has the potential to be a No. 1 goalie. On the base level, though, Bernier is a 23-year-old goalie with only 42 games of NHL experience. No team will give up the farm to get him, and the Kings are highly unlikely to simply take draft picks for Bernier. And what about contracts? Would the Kings trade Bernier before Quick is locked up to a long-term deal? The nightmare scenario for the Kings would be to trade Bernier, then have Quick walk next summer.

Asked about Bernier, in the context of the trade deadline, Lombardi would only say, “I understand the value of having two strong goalies.’’ So, take that for whatever you think it’s worth.

In general trade-deadline chatter, Kevin Allen of USA Today had a nice piece today about deadline deals, and how the breathless, endless chatter can lead to trouble for teams. Or, as Toronto GM Brian Burke put it, “The trade deadline is a pit of quicksand.’’