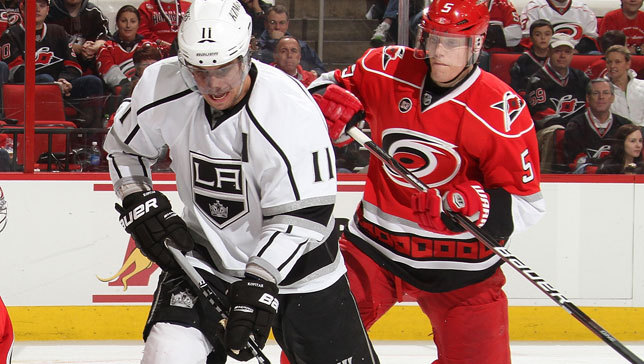 — The Kings’ offensive woes continued, as they lost to the Carolina Hurricanes 2-1 on Saturday night at RBC Center.

— The Kings have scored only one 5-on-5 goal in nine periods since they returned from the All-Star break. Three of their four goals in the last three games have been scored on the power play.

— The Kings have scored fewer than two goals in 20 of their 53 games this season, and they have a 3-11-6 record in those games.

— The Kings have scored a total of 12 goals in their last eight road games, but have actually outscored their opponents by a combined margin of 12-11 in those games.

— The Kings had been 9-0-1 this season when leading after the first period. They led 1-0 on Saturday after Anze Kopitar’s power-play goal.

— The Kings lost both ends of a back-to-back set of games for the first time this season. It was their ninth set of back-to-back games.

— Jonathan Bernier stopped 20 of 22 shots in his ninth start of the season. Bernier has allowed two or fewer goals in each of his last six starts.

— Anze Kopitar scored a power-play goal, to push his team-high totals to 16 goals and 46 points. Seven of Kopitar’s 16 goals have come on the power play.

— Justin Williams had an assist on the power play, his 26th assist and 36th point of the season. Williams has four goals and eight assists in his last 11 games.

— Jack Johnson had an assist on the power play, his 15th assist and 23rd point of the season. Johnson has one goal and two assists in his last three games.