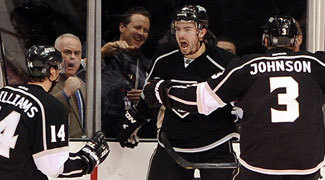 Nothing, it seems, can go right for the Columbus Blue Jackets this season. With the worst record in the NHL, and coming off a dreadful 6-0 loss to San Jose the night before, the Blue Jackets were a fraction of a second away from at least earning one point by taking the game to overtime. But, no. Drew Doughty’s goal with 0.4 seconds remaining gave the Kings the regulation victory, although nothing has come easy for the Kings against Columbus this season. In three games, the Kings are 2-1-0 against the Blue Jackets but have outscored them by a combined margin of only 5-4. The Blue Jackets haven’t been particularly strong in any one area against the Kings, but overall they’ve been gritty and opportunistic. Here’s how The Columbus Dispatch covered last night’s game, followed by some additional postgame quotes from the Blue Jackets’ locker room…

COACH TODD RICHARDS
(on the timing on the game-winning goal…) “Well, I don’t have anything official, any official report. Watching the replay and talking with our producer who runs our show, the clock stopped at 1.8 seconds, and it stopped for 1.5 seconds, and they scored with 0.5 seconds. Something happened and it’s really disappointing because I thought our guys battled and worked hard. They fought for 60 minutes and they deserve something, but they leave here feeling the negativity of a loss and the disappoint there, so I’m really disappointed for the players.’’

(on his team’s effort…) “We competed. We weren’t perfect for 60 minutes. They’re a good team, so they’re going to create things offensively and create opportunities for themselves. I liked the way that we competed with getting down 1-0 and continuing to battle, down 2-1 and continuing to battle. Guys were getting in front of shots and taking hits to make plays. They’re a big team and they play a big, heavy game. Right now, with the guys that we have, we aren’t as big of a team so we have to work extra hard. I thought the guys worked harder and they deserve something out of tonight.’’

COLTON GILLIES
(on the game…) “Everyone came out hard tonight. For the first two periods, we got work done. I don’t know if it was the fatigue of back-to-back nights or what it was. It’s just tough luck at the end there. Vermette made a great pass to me and that is something I will always remember.’’

(on which loss feels worse in last two games…) “Ah man, I think this one feels worse, especially when everyone played so hard. I thought maybe we could have deserved a little better tonight, but honestly that’s the way the game goes sometimes. I thought everyone left it on the ice, so it was good for the boys.’’

(on the team’s effort): “I think everyone is still trying to put the pieces together here and I know there are a lot of new guys in the lineup. I thought everyone played great and I think everyone should hold their heads high tonight.’’