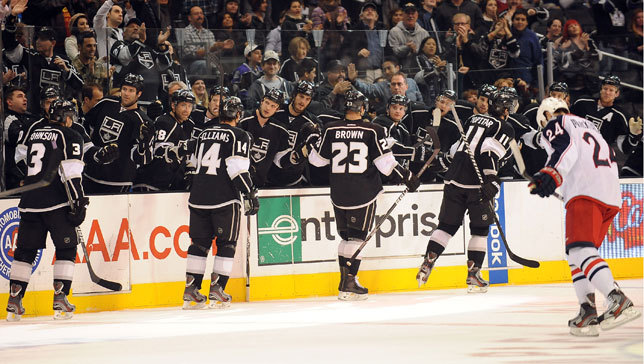 — The Kings recorded their first last-second victory in almost 12 years, as they beat the Columbus Blue Jackets 3-2 on Wednesday night at Staples Center.

— Drew Doughty scored the game-winning goal with 0.4 seconds remaining. That was the sixth “buzzer-beater’’ game-winner in franchise history, and the first since Jozef Stumpel scored with 0.3 seconds remaining to beat the Philadelphia Flyers 4-3 on Feb. 11, 1999.

— The Kings have a 14-0-1 record this season when they score at least three goals in a game.

— The Kings improved to 10-2-6 under coach Darryl Sutter.

— Jonathan Quick stopped 20 of 22 shots. Quick has allowed two or fewer goals in six of his last seven starts.

— Drew Doughty scored the game-winning goal on the power play, and also had one assist, to push his season totals to four goals and 20 assists. It was Doughty’s second game-winning goal of the season. Two of Doughty’s four goals have come on the power play. Doughty has two goals and seven assists in his last 11 games, and 15 points in his last 19 games.

— Justin Williams scored a power-play goal, his 10th goal and 35th point of the season. Williams has now recorded at least one point in nine consecutive games (four goals, seven assists). His career-best point streak is 11 games, set last season. Five of Williams’ 10 goals have come on the power play.

— Dustin Penner had one goal, his fourth goal and 12th point of the season. Penner has two goals in his last five games.