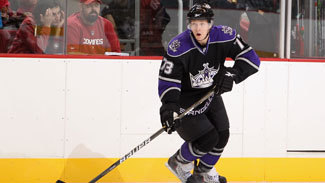 A post yesterday took a look at the Manchester Monarchs. Of course, there are also several Kings draft picks from the last couple years playing junior-level and NCAA hockey, so let’s take a look at them as well. The top prospect, by all indications, is Tyler Toffoli (pictured), who had a solid training camp with the Kings and leads the Ontario Hockey League in scoring. Here’s the list…