The view from Ottawa 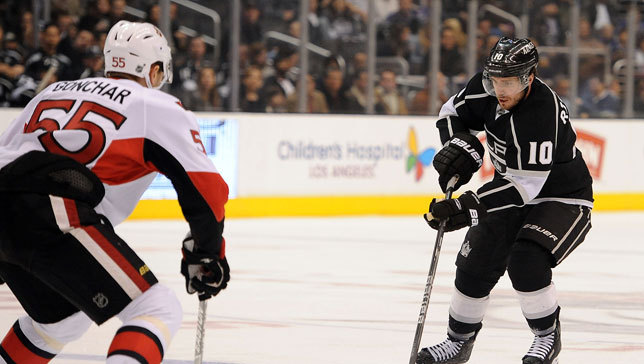 The Ottawa Senators were upset — and, according to video review, rightfully so — that defenseman Chris Phillips was called for covering the puck in the crease, with led to Trevor Lewis’ penalty-shot goal late in the second period. Fair enough, but by that point the Kings already led 3-0 and were well in control of the game. It’s tough to get a handle on a team such as the Senators, who are usually only seen in person once a season, but you’d have to think that the Senators have had far better games than the one they played against the Kings. The Senators are one of the surprise teams in the NHL this season, but they rarely put consistent pressure on Jonathan Quick — a nod to the Kings’ defense for their part in that, and to Quick for making the needed saves — and coach Paul MacLean’s decision to replace goalie Craig Anderson at the start of the third period seemed to be a clear indiciation that his team, in general, was not putting forth the desired effort. On the other hand, credit the Kings for the second period, one of their strongest all-around periods of the season. Here’s how the Ottawa Citizen and Ottawa Sun covered last night’s game, followed by some additional postgame quotes from the Senators’ locker room…

COACH PAUL MACLEAN
(on the game…) “I thought (the physical aspect) of the game was fine. Obviously the score wasn’t very good and I thought that (the Kings) did a better job of getting to our net than we did getting to their net. We had some opportunities in there as well, but they got the big win tonight.’’

(on the penalty calls in the game…) “I think, at the end of the night, they are all going to be even. The penalties are penalties and we took penalties. You can’t take penalties and continue to have success killing them off, especially on three penalties. We have to do better, and obviously if we skate better we take fewer penalties.’’

(on the penalty-shot call..) “I thought it was a big part of the hockey game. We get the benefit of replay and it shouldn’t have been a penalty shot. We get the benefit of replay, one and two and three times. I’m not sure if it’s reviewable in Toronto, on that kind of a call, but that’s just the way it is. I think having video means to get it right, so if it’s not right it should be (reviewed). That’s why you have video, to me.’’

CHRIS PHILLIPS
(on the Kings’ physical play…) “We were prepared for it. We knew they were going to come out. They lead the league in the amount of finished (hits) and we had to be prepared for that. We sat in the box too much tonight and they capitalized there. It got away from us.’’

(on the penalty-shot call…) “Their explanation was that I did cover (the puck). I was upset because I thought I went in and swiped it, which I think it looks like that’s what happened. It’s frustrating when you are struggling in the game and then you get some calls against you that have to try and not let affect you and the team. It’s tough. Emotions run high and sometimes get the best of you. I think that was a little bit of the case tonight as well.’’

(on the team’s performance…) “The work ethic was there. Maybe we got a decent number of shots on net but we aren’t going to score too many goals from the outside. We have to do a better job of getting to the net and trying to get the rebounds.’’