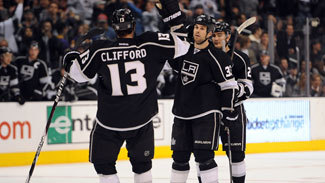 — The Kings went into their extended All-Star break with a win, as they beat the Ottawa Senators 4-1 on Monday night at Staples Center.

— The Kings now have eight days between games, before they host Columbus on Feb. 1.

— Jonathan Quick stopped 27 of 28 shots. Quick has allowed two or fewer goals in five of his last six starts.

— Kyle Clifford had one goal and one assist, to push his season totals to three goals and six assists. Clifford had his second multi-point game of the season. Clifford also had a first-period fight for the unofficial “Gordie Howe Hat Trick.’’

— Willie Mitchell scored a goal, for his third goal and 11th point of the season. Mitchell’s career high for goals is five, set last season.

— Jack Johnson scored a 5-on-3 goal, for his eighth goal and 21st period of the season. Johnson tied his career-high in goals. He also had eight goals in 2009-10. Five of Johnson’s eight goals have come on the power play.

— Colin Fraser had two assists, and now has three assists and four points this season. Fraser recorded his first multi-point game since Nov. 12, 2010, when, as a member of the Edmonton Oilers, he scored two goals against New Jersey.

— Drew Doughty had two assists, and now has 19 assists and 22 points this season. It was Doughty’s fourth multi-point game of the season and his first since Dec. 22. Doughty has one goal and six assists in his last 10 games.

— Justin Williams had one assist, his 25th assist and 34th point of the season. Williams has recorded at least one point in eight consecutive games (three goals, seven assists). Williams’ career-best point streak is 11 games, set in 2010.