The view from Denver 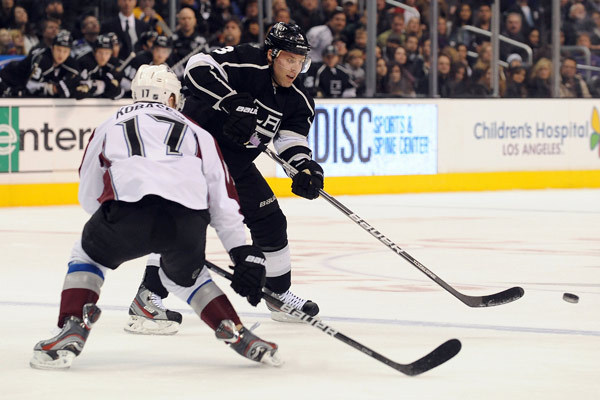 It’s hard to imagine a bigger “missed opportunity’’ game than the one the Kings played last night. They entered the game in seventh place in the Western Conference and had a chance to put some distance between themselves and eighth-place Colorado, as the Kings entered the game with 56 points to the Avalanche’s 52. Three of the Kings’ division rivals — San Jose, Dallas and Phoenix — lost, and the Kings could have (at least temporarily) moved into first place in the Pacific Division with a win. Instead, they lost, and now remain in seventh place, only two points ahead of Colorado and three points ahead of ninth-place Minnesota. This was a Colorado team that had allowed a total of nine goals in its last two games, but the Avalanche certainly held the Kings in check and picked up two very valuable points. Here’s how The Denver Post covered last night’s game, followed by some additional postgame quotes from the Avalanche’s locker room…

Avalanche gets 3-1 victory at Los Angeles

COACH JOE SACCO
(on the game…) “I thought we played well tonight. I thought we had a really good first two periods and I like the tempo in our game. I thought our guys competed real hard tonight. We got down a goal and stuck with it and we were able to respond right away there right after they scored. It was nice to see a guy like Cody (McLeod) get rewarded for a lot of hard work that he does. It was a nice play by Elliott on the goal, a nice outlet pass to him. It really was a good effort from all of our guys tonight and that’s a tough team to play against, to come in here and grab a couple points. We’re very pleased.’’

(on Giguere’s play…) “He was solid tonight. He gave us a chance to win and that’s all we ask of him. Goaltending is important for every team. This league, you look around, you need saves at critical times and at big moments, and I thought their first power play, he made a big save right away to start the game. He made a couple other great saves but again, I go back to our overall team game tonight. We had some passion tonight and we had some desperation. That’s how you have to play at this time of the year if you really want to be a playoff team. It’s a tight conference, it’s a tough conference, and we’re just trying to get points.’’

JEAN-SEBASTIEN GIGUERE
(on the game…) “It’s a big win for us. Any road win, we’ll take at this point. We’re trying to approach every game as a playoff game right now. We’re trying to catch those guys and I thought we had a terrific game. I was happy that we were playing well. I thought we had a jump. They scored the first goal but we came back right away and that’s part of the job. You have to be ready for any kind of situation and you have to find a way to stay focused. Those guys (in front of me) are playing well, so I got to try to help them out.’’

(on Peter Mueller’s return to the lineup…) “We’re happy for him. He’s been through a tough battle and none of us can even imagine what it’s like, and he’s having fun right now, which I don’t think he’s had fun for the last two years. It’s nice to see that.’’

(on his success against Kings…) “it’s a fun building to come into. There’s always a lot of atmosphere. Obviously they have a good team so you need to be prepared and ready to go. It’s always fun to play against them. Always a lot of action and they’re a skilled team. It’s one of those games where you want to get up and play.’’

PETER MUELLER
(on his recent goals…) “It doesn’t matter about the goals. I’m just happy to be back, first and foremost. Playing a tough team, especially L.A., at home, it’s a tough challenge. It fell apart a little bit in the third, but that just shows the character of the guys. They bailed me out on that penalty and Giggy [Giguere] stood on his head in the third.’’

(on his goal…) “Just trying to get the big body in front and cause some havoc. Fortunately I got a little tip on it and it went in.’’