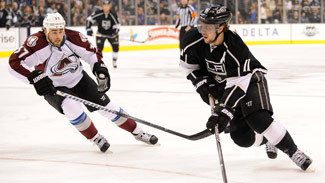 — The Kings suffered their second regulation loss of the Darryl Sutter era, as they fell to the Colorado Avalanche 3-1 on Saturday night at Staples Center.

— The Kings have scored a total of five regulation goals in their last four games.

— Jonathan Quick stopped 28 of 31 shots. Quick had allowed two or fewer goals in nine of his previous 10 starts, and had been 2-0-3 in his previous five starts.

— Anze Kopitar scored the Kings’ goal, his team-high 15th goal and team-high 44th point of the season. Kopitar had been tied with Mike Richards for the team goal lead. Kopitar has four goals and four assists in his last seven games.

— Dustin Brown had an assist, his 14th assist and 27th point of the season. Brown has three goals and three assists in his last seven games.

— Justin Williams had an assist, his 24th assist and 33rd point of the season. Williams has recorded at least one point in seven consecutive games and has three goals and six assists in that span.