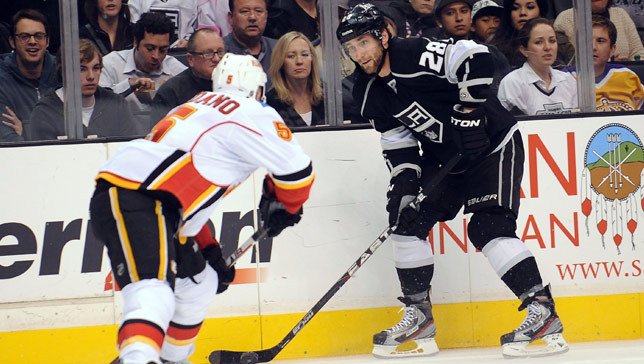 — The Kings once again went beyond regulation and came up one point short, as they lost to the Calgary Flames 2-1 in a shootout on Thursday night at Staples Center.

— Justin Williams scored for the Kings in the shootout but the Flames beat goalie Jonathan Quick twice in three rounds. The Kings are now 4-6 in shootouts this season. They were 10-2 in shootouts last season and 10-8 in shootouts in 2009-10.

— The Kings had won four consecutive games against the Flames.

— Of the Kings’ last 16 games, 10 have gone to overtime. The Kings are now tied (with Florida) for most overtime/shootout losses this season, with 10.

— Jonathan Quick stopped 24 of 25 shots in regulation and overtime. Quick has an 8-1-5 record in his last 14 games, with 21 goals allowed. In Quick’s last five losses (including overtime/shootout), the Kings have scored a total of seven goals, including four goals in one game.

— Dustin Brown scored the Kings’ goal, his 13th goal and 26th point of the season. Brown has scored three goals in his last five games.

— Justin Williams had an assist, his 23rd assist and 32nd point of the season. Williams has recorded at least one point in six consecutive games, with three goals and five assists in that span.

— Willie Mitchell had an assist, his eighth assist and 10th point of the season. Mitchell has an assist in each of his last two games.