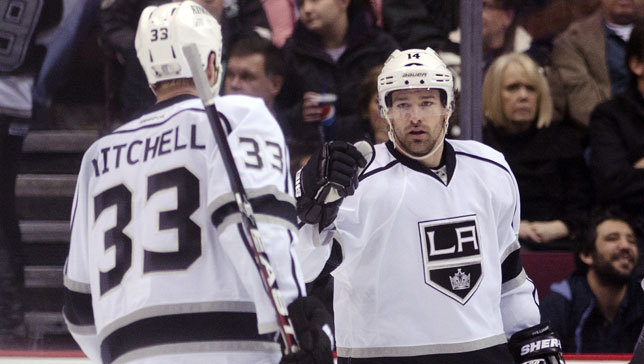 — The Kings broke their shootout slump and beat the Vancouver Canucks 3-2 in a shootout on Tuesday night at Rogers Arena.

— The Kings had lost three consecutive shootouts and are now 4-5 in shootouts this season. Justin Williams and Mike Richards scored in the shootout, and Jonathan Quick stopped two of three shots.

— The Kings had lost five of their previous six regular-season games in Vancouver.

— The Kings improved to 8-1-5 under coach Darryl Sutter.

— Dustin Penner scored a goal, his third goal and 11th point of the season. Penner had gone 17 consecutive games without a goal.

— Drew Doughty had one assist, his 17th assist and 20th point of the season. Doughty has recorded an assist in four of his last five games.

— Willie Mitchell had one assist, on the power play, his seventh assist and ninth point of the season.

— Rob Scuderi had one assist, his fifth assist and sixth point of the season. Scuderi has recorded an assist in two of his last three games.