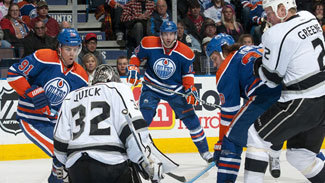 Some teams just have other teams’ numbers. The Edmonton Oilers entered last night’s game having allowed an average of 2.9 goals per game, nothing to be particularly proud of. Yet, in two meetings with the Kings this season, the Oilers have allowed a total of one goal in 123 minutes, 6 seconds. It’s not about a goalie either. Nikolai Khabibulin shut out the Kings in November, and last night, Devan Dubnyk stopped 20 of 21 shots. Of course, for long stretches of the game, Dubnyk could have leaned against the post and napped, but give credit to the Oilers. They forechecked aggressively and forced the Kings into countless mistakes, and they blocked shots. The Kings had 21 shots on goal and had 19 other shot attempts blocked. That — and perhaps a questionable penalty call in overtime — allowed the Oilers to win for only the third time in their last 15 games. Here’s a sampling of how the Edmonton Journal and the Edmonton Sun covered last night’s game, including a nice piece from the Journal’s Jim Matheson on Darryl Sutter and Dean Lombardi…