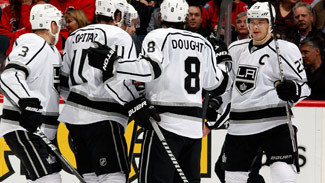 — The Kings earned a rare victory in Calgary, as they beat the Flames 4-1 on Saturday night at Scotiabank Saddledome.

— The Kings beat the Flames for the fourth consecutive time, but won for only the second time in Calgary since March 2006.

— The Kings improved to 7-1-4 under coach Darryl Sutter, who got a win against his former team — Sutter spent eight years in Calgary as coach and (later) general manager — and against his younger brother Brent, the Flames’ coach.

— Jonathan Quick stopped 29 of 30 shots. Quick has a 7-1-3 record in his last 11 games, and has allowed either one goal or zero goals in six of his last seven games.

— Mike Richards had one goal and one assist, to push his season totals to 14 goals and 12 assists. Richards and Anze Kopitar are tied for the team high in goals. Richards had not scored a goal in nine consecutive games. It was Richards’ fifth multi-point game of the season and his first since Nov. 22.

— Dustin Brown scored an empty-net goal and had one assist (on the power play), to push his season totals to 12 goals and 13 assists. Brown has two goals and two assists in his last three games, and has seven goals in his last 15 games.

— Anze Kopitar scored a power-play goal, his 14th goal and 41st point of the season. Kopitar and Mike Richards are tied for the team lead in goals. Kopitar has scored a goal in three consecutive games and has three goals and two assists in his last three games. Six of Kopitar’s 14 goals have come on the power play.

— Matt Greene scored a goal, his third goal and seventh point of the season. Two of Greene’s three goals this season have been game-winning goals. Greene set a single-season career high in goals. He had scored two goals in each of the past four seasons.

— Justin Williams had two assists, including one on the power play, to push his season totals to 22 assists and 29 points. Williams has one goal and four assists in his last three games.

— Dustin Penner had one assist, his eighth assist and 10th point of the season. Penner has two assists in his last three games.

— Jarret Stoll had one assist, his ninth assist and 14th point of the season.

— Rob Scuderi had one assist, his fourth assist and fifth point of the season.

— Drew Doughty had one assist, his 16th assist and 19th point of the season. Doughty has recorded an assist in three consecutive games.