The view from Dallas 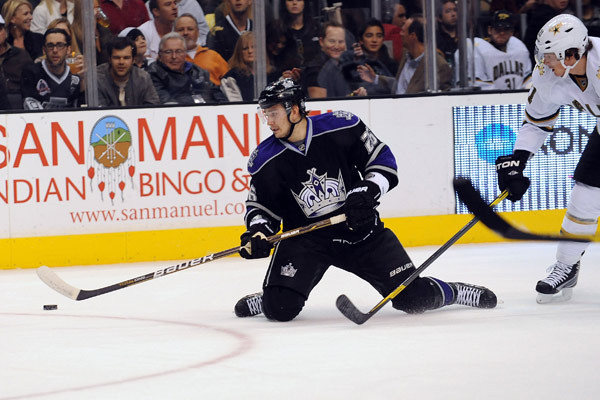 The Dallas Stars are a walking advertisement for NHL realignment. Assuming their plane left L.A. sometime around midnight, they probably got home at 5 a.m. Central time. From a division game. That said, if the Stars end up leaving the Kings’ division, we’re all going to lose some compelling hockey. The two teams have played five games this season. The Kings have won two in regulation, lost one in regulation, lost one in overtime and lost one in a shootout, and the aggregate score is 13-13. Do you think maybe the series finale, on Feb. 12 in Dallas, will be compelling? For some coverage of last night’s game, check out Mike Heika of The Dallas Morning News, followed by some additional postgame quotes from the Stars’ locker room…

COACH GLEN GULUTZAN
(on the game…) “(The Kings) are a real good team and I’m a big fan of Darryl Sutter. (I watched him in) six years in Las Vegas [as coach of the Flames’ ECHL affiliate] and you can certainly see his influence on that team. I thought it was a tremendous hockey game tonight, maybe not for the coaches but for the fans. It was real exciting. It was fast, I thought, through 65 full minutes, so it was a real good game.’’

(on the hit on Anze Kopitar…) “We watched it in slow motion there and we watched it again. In my mind, it was a clean hit but he fell very awkward. I hope he’s OK. I don’t know the extent on anything there but he fell awkwardly into the boards. I don’t think anything will come of it but that’s for the league to decide. Hopefully he is OK. (Kari Lehtonen) was hurt too, in that goal-mouth pile up there, but he is going to be fine.’’

LOUI ERIKSSON
(on the game…) “Of course it is an important win for us. We always play tight games against L.A. I thought we came back there pretty good and finally won the game, so it was two big points for us.’’

(on the third period…) “It was really intense out there. I thought we took a little too many penalties but we found a way to stick with it and we got the two points.’’

(on the Stars’ improvements…) “I thought we played (a) really hard-working game through the whole game. I think all the guys worked really hard and Kari (Lehtonen) was good for us again here. It was just a solid game for the whole game and we came up with the two points.’’