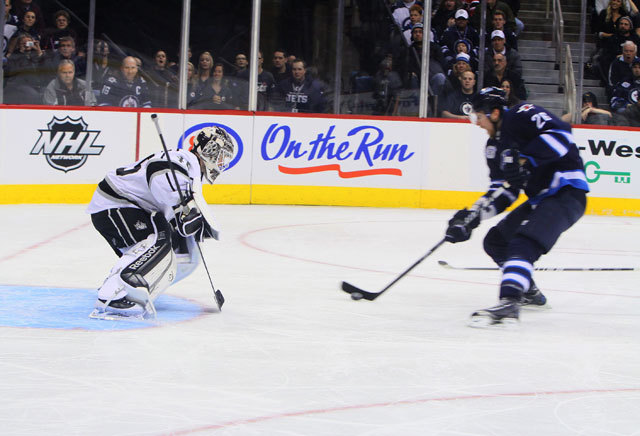 There’s no mystery why the Winnipeg Jets have been much better at home (13-6-1) this season than on the road (5-8-4). The arena is sold out and, well before the first drop of the puck, almost all of the fans are in their seats, cheering and chanting. The Jets play an aggressive game, and seem to feed off the atmosphere in MTS Centre, which is a great arena with tremendous press-box sight lines (yes, I’m looking at you, Staples Center). The Jets aren’t super-talented but they’re aggressive and relentless, and they got rewarded for it last night. Here’s how the Winnipeg Free Press covered last night’s game, followed by a couple quotes courtesy of The Associated Press story…

(on Chris Mason’s play…) “He gives you no reason to not play him. He continues to battle hard, he comes in cold. I mean, there can’t be a tougher job than what he has. He certainly gives a comfort level to your team.”

EVANDER KANE
(on Chris Mason’s play…) “He’s been rock solid for us anytime he’s had to come in. We have a lot of confidence in him, as we do with (Ondrej) Pavelec.”

CHRIS MASON
(on the game…) “We figured it would be a low-scoring game. With them coming in, they didn’t play as tired as I thought they would.”