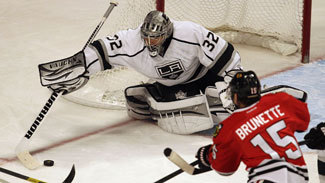 By the grace of Jonathan Quick and a couple gritty, net-front goals, the Kings recorded their first victory in Chicago since 2007. Jonathan Toews was a one-man force, in the offensive zone and the faceoff circle (14-for-20) and Patrick Sharp recorded a game-high eight shots on goal, but the Blackhawks were shut out for the fourth time this season. They had scored at least four goals in five of their last six games. Here’s a sampling of how the Chicago media covered the game, followed by some additional postgame quotes from the Blackhawks’ locker room…

COACH JOEL QUENNEVILLE
(on the game…) “We had some good chances tonight. I thought both their goals should have been whistled down. Both goals should have been called something, infractions on both their goals. Clearly the refereeing tonight was tough to watch, but we still had a lot of chances at the other end, and unfortunately you’re not going to win the game when you don’t score a goal.’’

(on whether he thought goalie interference should have been called on the Kings’ goals…) “Yes, and slew foot. (Corey Crawford) looked great. Both goalies tonight made several great saves. Crow gave us a chance, kept us in the game. I think scoring first would have been important. You get a lot of momentum off it. We saw, in their building, same type of thing. We scored first and it put us in a good spot.’’

JONATHAN TOEWS
(on the game…) “Obviously we’re disappointed that we didn’t get two points. We didn’t play a bad game, but that team wanted it, they had that desire out there. We just didn’t match that. We had a lot of chances on the power play, but when it comes down to it, it’s a tight game all the way, you’ve still got to find a way to win. It’s disappointing we couldn’t find a way to take advantage of some of those chances at the end, but it is what it is, we’ll learn from the mistakes that we made.

“Give (Jonathan Quick) credit, he’s a good goaltender, he made some pretty good stops out there. But you’d have to say he had a horseshoe you-know-where on a few of those plays. He was making some big stops out there that, I don’t know if it just got to us, that we felt that the puck just wouldn’t go in tonight, and that trend kept going in the third period. It’s frustrating when they don’t go in. When you get shut out at home, you don’t want to lose that way.”