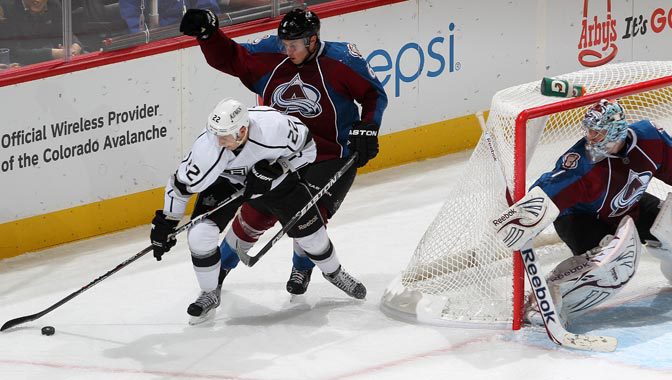 — The Kings lost in regulation on the road for the first time this season, as they fell to the Colorado Avalanche 3-2 on Sunday night at Pepsi Center.

— The Kings outshot the Avalanche 32-16, including 15-4 in the second period. The 16 shots were the fewest the Kings have allowed this season. Every Kings forward recorded at least one shot on goal except Dustin Penner. The Kings are 1-3-1 when outshooting their opponents and 5-0-1 when being outshot.

— The Kings went 2-for-4 on the power play and 3-for-4 on the penalty kill and allowed one shorthanded goal, the first of the season. It was the second time, in 11 games, that the Kings scored more than one power-play goal in a game.

— Scott Parse scored a power-play goal. Parse has two goals in three games after he sat the previous six games as a healthy scratch.

— Anze Kopitar scored a goal. Kopitar leads the Kings in goals (six) and points (14). He has two goals and two assists in his last three games.

— Jarret Stoll had one assist, on the power play, for his first power-play point of the season.

— Dustin Brown had one assist. Brown has one goal and four assists in his last three games.

— Drew Doughty had one assist, for his second assist and point of the season.