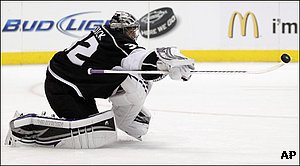 In the third all-California playoff series in NHL history, Northern California is now on the board. The Kings beat the Oakland Seals in 1969 and the Anaheim Ducks beat the San Jose Sharks two years ago, but the Sharks are on to the second round after beating the Kings last night. It couldn’t have been much closer. Three of the six games went to overtime, and each team scored 20 goals in the series. Here’s how the San Jose Mercury News covered last night’s game, followed by some additional postgame quotes from the Sharks’ locker room…

COACH TODD MCLELLAN
(on the game…) “We weren’t pleased with the result in Game 5. We weren’t happy with the start in Game 5, but once we made the change and got going, we liked a lot of the things we did. I thought our start tonight was exactly what we needed. We needed that for the goaltender so that he could feel comfortable. We needed that for the back end so they felt comfortable breaking out pucks.

“L.A. played extremely hard. They were very well-prepared, and their staff did a very good job of preparing their team to play against us. We don’t do anything easy. There is some resiliency in the locker room. The leadership showed through when it had to. The belief in the goaltenders we had was very important. We learned a lot about each other and this is just a small part of what we hope is a long journey.”

JOE THORNTON
(on the winning goal…) “We said, `Just get in front of the net and good things will happen.’ You’ve seen it the whole series, weird things happen in front of the net. The puck just spit out nice and I just gobbled it up. … It’s a good feeling to win. It’s nice that we don’t have to play Wednesday and we can rest and hopefully have a day off. We still have a lot to do and it was a tough series for us.”