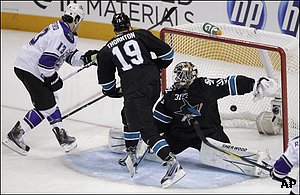 Sharks stumble to 4-0 loss to Kings in Game 2

TODD MCLELLAN
(on the game…) “I thought we started well tonight. We had the first seven or eight minutes of the game we wanted to play. We got on the power play and lost a little momentum there. We were very undisciplined as far as penalties go, and we can’t do that. We have to understand where we are at this time of the year. … I thought they were a much more competitive team than we were. We can talk about systems and what we did well and didn’t do well on the power play, penalty kill, and faceoffs. It has to start with competitiveness.

“You have to give them some credit. They were very good at bringing the puck out of their zone. … They are one of the top defensive teams in the league for a reason. They have the ability to defend and you can’t fall behind because they just shut it down and their goaltender is obviously very good.”