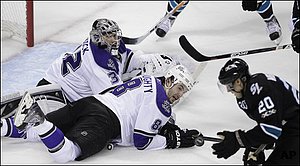 What a wild night it was in San Jose, with a first-minute goal, Jarret Stoll’s hit on Ian White, a scoreless, hold-your-breath third period and a 14-plus minute overtime period that included a combined total of 23 shots on goal. The series is just getting started, and it only figures to get more intense and physical going forward. Here’s how the game was covered by the San Jose Mercury News, followed by some additional quotes from the Sharks’ locker room…

(on the Kings’ stronger play after the first period…) “That’s going to happen in a game and in a series. You’re not going to dominate from start to finish. We had a great first period. But they’re a great hockey team and even though everybody talks about them missing their top guy, they’re still going to get the best of us for some moments.”

(on playing 35 minutes…) “I was going every second shift, so I couldn’t jump in the play as much as I like. I had to be smart and let our forwards to the job and stay back a bit.”

(on winning Game 1…) We’ve had a pretty bad history as far as losing the first game. It could have been one of those nights again where I felt we were for the most part the better team and still lost. But that’s a huge first win for us. They just get bigger and bigger now. We definitely want to get out of here up 2-0.”

(on what he thought in the locker room after regulation…) “You’re telling yourself you’re going to get that chance and score a goal. Why not? Let’s do it.”

(on his goal…) “From that angle, the D were sliding over, to be honest I don’t know if I could have gotten it on net any place else. … I was checking behind me a couple of times to make sure nobody was going to catch me. Once you see you’re in the clear and you have a chance like that, definitely you have to stay out.”

(on Jonathan Quick’s game…) “He’s great. You saw some of his saves tonight. He’s really good down low. He’s quick and athletic. So you have to get traffic there and find ways to get more than 25 shots on him every night.”

(on getting three assists after missing a week with injury…) “I felt good. Maybe at this time of year a lot of it is adrenalin. I’m always excited to start the playoffs.”
(on the physical nature of the game…) “Opening round of the playoffs and for a first game, that was really physical. They got guys that hit hard. I thought we did a good job as well. We expected an emotional and hard first period but that might have been above and beyond what everyone thought and it’s a good way to develop a rivalry.”

(on Joe Pavelski…) “Pav’s a tremendous player for us, we count on him in so many different situations. He’s really recognized at this time of year as a guy that elevates his play and scores huge goals. That’s the obvious part of his game but there’s the faceoffs, the penalty killing, the work along the boards and the defensive play also.’’