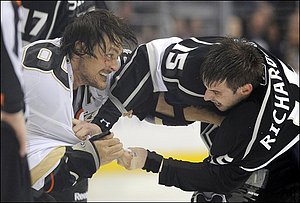 The Kings and Anaheim Ducks — along with every Western Conference team — will be keeping a close eye on the game between Chicago and Detroit that is just about to get underway. If the Blackhawks get one or two points, the Kings will finish eighth in the conference and face No. 1 Vancouver in the first round. If the Blackhawks lose in regulation, they will stay behind the Kings, who will finish seventh and face No. 2 San Jose. The Ducks are locked into fourth place based on their victory over the Kings last night. Here’s how The Orange County Register covered the game, followed by some additional quotes from the Ducks’ locker room…

Ducks get a lot accomplished with victory

COACH RANDY CARLYLE
(on the game…) “We found a way to get ourselves into a good position, from thinking about where we were a couple months ago. You’ve got to credit our players. They’re the ones who put it out on the line, night in and night out. It’s about a team that’s trying to work its way through all the hurdles that it’s been presented and now we have an opportunity to play at home.

“I don’t think anyone picked us to have home-ice advantage at any point, but it’s funny how things fall into your lap when you win your fair share of games. Its back to our players. They’ve worked extremely hard and stayed committed and they’ve earned this.”

DAN ELLIS
(on the game recap…) “They [the Kings] really brought it tonight. It wasn’t that the initial shot was dangerous, but they had lots of traffic. They’re always in front of the net and make it difficult to see. You’ve just got to try to look around them and make a good block and hope it hits you.

(on finishing the regular season strong…) “You always want to go into the playoffs on a little bit of a roll and we’ve managed to put together a few wins against good teams. Were starting to build our confidence and feel better about ourselves, and hopefully that carries through and we can establish some good habits and get ready for the playoffs.”

COREY PERRY
(on possibly winning the Hart Trophy…) “I’m still not thinking about it. It’s just a few days off and then a new season begins. I’m more focused on playing hockey and playing in the playoffs. That’s where my head is right now, but when the playoffs are all said and done, we’ll see what happens.”