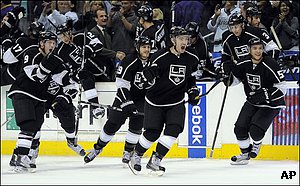 — The Kings clinched a playoff spot with their 3-2 shootout victory over the Phoenix Coyotes on Wednesday night at Staples Center.

— The Kings are assured of finishing in the top eight in the Western Conference, but can still finish anywhere from No. 4 to No. 8.

— The Kings have tied the franchise single-season record with 46 wins. They set that mark in the 1990-91 season and tied it last season.

— The Kings improved their shootout record this season to 10-2, as Michal Handzus and Jarret Stoll scored and goalie Jonathan Quick stopped two of three attempts.

— The Coyotes outshot the Kings 35-33. The Kings have recorded at least 32 shots in three consecutive games and in four of their last five games. It was the third time in the Kings’ last four games that they have allowed 35 shots on goal.

— Jonathan Quick stopped 33 of 35 shots in regulation and overtime and improved to 10-0 in shootouts this season.

— Jarret Stoll scored a first-period goal and also scored the deciding goal in the shootout. Stoll is 9-for-10 in shootouts this season. Stoll’s first-period goal was his 20th goal of the season. This is the second time in Stoll’s seven-year career that he has reached the 20-goal mark. Stoll scored a career-high 22 goals for the Edmonton Oilers in 2005-06. Stoll became the sixth Kings player to reach the 20-goal mark this season, following Dustin Brown, Anze Kopitar, Dustin Penner, Ryan Smyth and Justin Williams. The last time the Kings had six 20-goal scorers was in 1992-93, when it was done by Mike Donnelly, Tony Granato, Jari Kurri, Corey Millen, Luc Robitaille and Tomas Sandstrom.

— Kyle Clifford scored a second-period goal, his seventh goal of the season. Clifford has two goals and one assist in his last four games.

— Dustin Brown had one assist, his 28th assist of the season. Brown has three goals and three assists in his last six games.

— Wayne Simmonds had one assist, for his 30th point of the season. Simmonds has one goal and two assists in his last three games.

— Rob Scuderi had one assist, his 13th assist of the season. Scuderi has 15 points this season, one short of the career-high 16 points he had with the Pittsburgh Penguins in 2008-09.