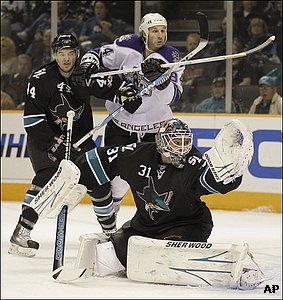 Last night’s game was the final regular-season meeting between the Kings and the San Jose Sharks, and it certainly left a mark with the Kings. It was the most lopsided Kings-Sharks score since April 6, 2006, when the Sharks beat the Kings 5-0. With the win, the Sharks claimed their fourth consecutive Pacific Division title (and sixth in their last nine seasons) and prevented the Kings from clinching a playoff spot. Here’s how the San Jose Mercury News covered the game last night, followed by some additional quotes from the Sharks’ locker room…

(on winning the division…) “You want to win your division so you get home ice, obviously. We’ve got  a pretty darn good division, so it’s a feather in your cap, but we’ve still got some work to do. We’re fighting to get that second seed. It’s a good step for us, though.”

(on getting a “Gordie Howe hat trick”…) “I wasn’t aware of the Gordie Howe hat trick, to be honest with you. I just turned around and saw two guys kind of hitting at Dougie. I know he could probably take two guys any day of the week, but I just kind of wanted to go in there and help him out like he’s been doing for me all year.”

(on getting offensive production from defensemen…) “We’ve been putting the puck in the net a lot a last few games, myself and Pickles [Marc-Eduoard Vlasic]. We haven’t done too much of that this year, but it’s nice for the ‘D’ men to chip in.”

(on the recent goal-scoring binge…) “Defensively, we’re pretty sound. I think it starts in the D-zone. We’re five guys back, we’re blocking shots, we’re taking care of business back there. It got as little loose for a little while, but for the most part it starts in the D-zone and carries over. We’ve got some lines going, playing well.”

(on winning the division…) “That’s nice. I’m a big believer in home-ice advantage. The way we’ve been playing the last couple months here, we’re going to need our crowd to our advantage come playoff time. There are still a few games left here. We want to make sure we play the right way and finish strong so we can carry that over.”

(on the recent for the goal-scoring binge…) “Second chances. We’ve shot the puck a lot and we’ve been able to find loose ones for second opportunities. We knew they were going to be a very good defensive team, coming in, and they didn’t give up many. Without taking the first one you never get a chance at the second. It’s part of the game plan.”

(on Ryane Clowe’s injury…) “Clowie’s just a lower body. He tweaked something. He’s getting looked at right now and we’ll see how he is for tomorrow.”

(on the good scoring chances…) “There’s a couple that I’m sure their goaltenders would like to have back, but we held onto the puck long enough to create some real good opportunities. You’re not going to be beat Quick or Bernier or the L.A. Kings very many times on that initial shot, so you’d better be prepared to play on the inside and find some of the garbage. You look at the very first goal, Mitchell gets it to the net and Pavelski’s right there. Maybe that was a result, or maybe that caused us having more scoring opportunities.”

(on winning division and securing at least one round of home-ice advantage…) “That’s the benefit, not the banner or anything else. The benefit is we know we’ll be in the 2 or the 3 spot and as playoffs roll around we’ll get the opportunity to start in front of our great fans. We worked hard to earn that right. Now we have to take advantage of it when it does arrive.”