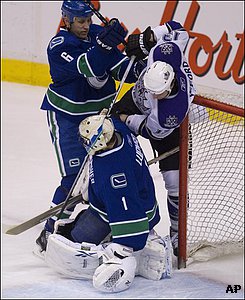 — The Kings matched an unfortunate franchise record as they lost to Vancouver 3-1 on Thursday night at Rogers Arena.

— The Kings were outshot 35-19 in the game and 16-0 in the third period. It was the fifth time in franchise history that the Kings failed to record a shot on goal in a period. It had happened most recently in an Oct. 18, 2003 game against Boston.

— The Kings finished the four-game season series against Vancouver with a 2-2 record, including one shootout win.

— Despite their loss, the Kings had their “magic number” for making the playoff reduced to six because of Dallas’ regulation loss to San Jose. Any combination of six points gained by the Kings, or lost by the Stars, would give the Kings a playoff spot. The Kings and Stars play Saturday afternoon at Staples Center.

— Jonathan Quick stopped 32 of 35 shots in goal. In his previous three games against Vancouver this season, Quick stopped a combined total of 81 of 85 shots.

— Kyle Cifford scored the only goal for the Kings, his fifth goal of the season in 71 games. Clifford also received a five-minute checking-from-behind penalty and a game misconduct for his hit on Vancouver’s Christopher Tanev with 6:24 remaining in the third period.

— Drew Doughty had one assist, his 28th of the season in 71 games. Doughty has two assists in his last three games.

— Brad Richardson had one assist, his 12th assist in 63 games.